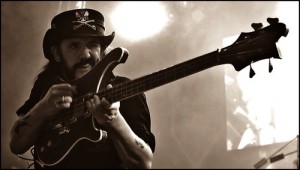 When I read this news an hour ago I couldn’t believe it. I still can’t. Earlier today I downloaded four Motörhead songs to play on the radio show that I co-host with Dan the Wrench that bears the name of a Motörhead song – “Bite the Bullet.” After I downloaded those songs I used the Amazon gift card that my parents gave me for Christmas to buy an “Everything louder than everything else” Motörhead shirt – a band fronted by the man who celebrated the beginning of his seventh decade on Christmas Eve.

On September 7, 2015 I wrote about how Lemmy had to cancel several shows because he was recovering from a lung infection. Today an aggressive form of cancer took his life.

According to the band’s Facebook page, “He had learnt of the disease on December 26 and was at home, sitting in front of his favorite video game from [sic] The Rainbow which had recently made its way down the street, with his family. We cannot begin to express our shock and sadness; there aren’t words. We will say more in the coming days, but for now, please…play Motörhead loud, play Hawkwind loud, play Lemmy’s music LOUD. Have a drink or few. Share stories. Celebrate the LIFE this lovely, wonderful man celebrated so vibrantly himself. HE WOULD WANT EXACTLY THAT.”

And that’s precisely what I’m doing right now – toasting Lemmy and blasting Motörhead while writing about the man who claimed to drink a bottle of Jack Daniels a day (ouch), wore black, slayed his guitar, and made his rock and roll raspy voice heard. Amazingly, Lemmy’s hard living didn’t affect his voice which allowed the band to continue cutting albums. Released on August 28, Bad Magic is Lemmy’s final record and it’s excellent. Bookended by “Victory or Die,” which showcases his incredible guitar skills (remember he plays bass), and a surprising cover of the Rolling Stones’ “Sympathy For The Devil,” the album is exactly as it should be: loud, fast, and exciting. Clearly, 40 years later, Lemmy rocked harder than everyone else.

A few things you may not know about Lemmy Kilmister:

Rest in peace Mr. Kilmister – I’ll be playing your music fast and loud on Wednesday.