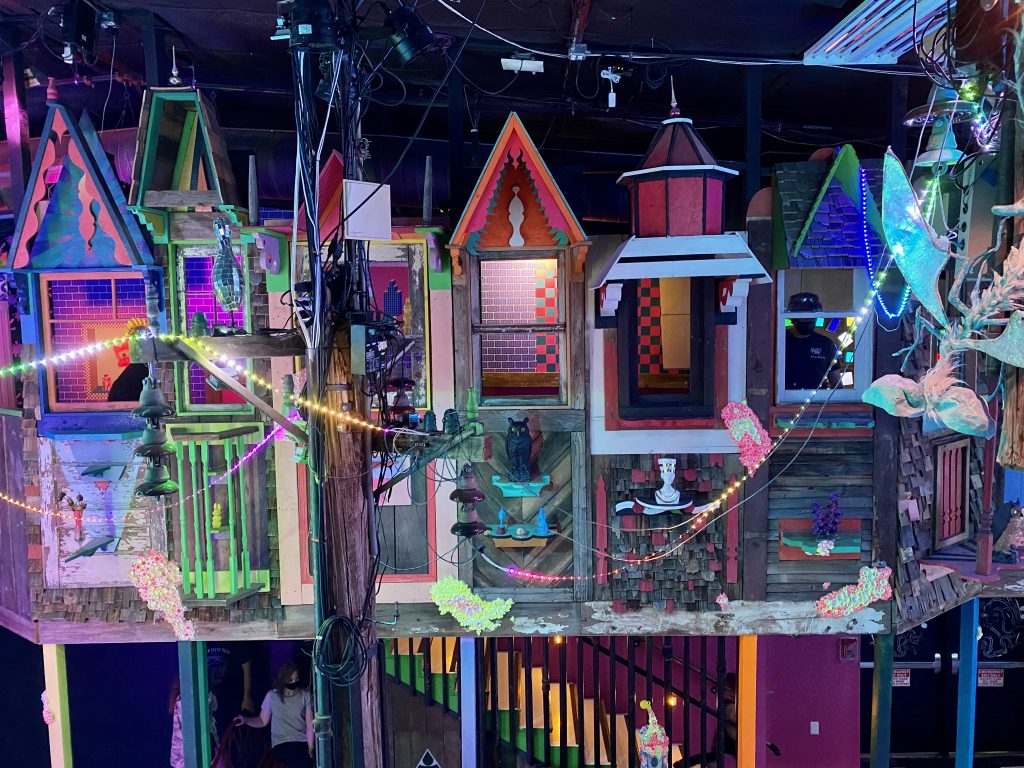 Over the last few years, several friends experienced the Meow Wolf exhibit and said it was like nothing they had seen before. But they couldn’t quite describe it. What I remembered mostly was photos of people walking through a refrigerator and lots of neon, so when we traveled to Santa Fe a few weeks ago I wanted to see it for myself. Even with strict Covid policies, it was definitely worth the time and money.

Formed in 2008, Meow Wolf is described and began as “an artist collective by a group of young residents hoping to supply Santa Fe with an alternative art and music venue.” Apparently, at the first meeting of the collective, everyone put two scraps of paper with a word on each one in a hat, and the first two scraps drawn became the name of the collective.

Located off the beaten path in Santa Fe, Meow Wolf encompasses a 20,000 square-foot facility that used to be a bowling alley. The website says “Meow Wolf’s House of Eternal Return is a mind-bending, explorable art experience for people of all ages.” It also says that “Meow Wolf creates immersive and interactive experiences that transport audiences into fantastic realms of story and exploration. This includes art installations, video and music production, and extended reality content.” Although neither description really explains exactly what goes on, the second explanation is closer. And it really is something to see. 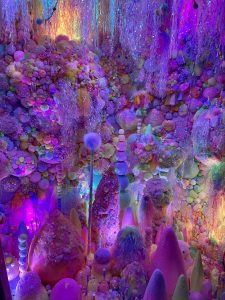 Now that I’ve experienced Meow Wolf for myself, I’ll give the description a go: Meow Wolf is an enormous art installation that invites visitors to touch and photograph everything, which is a nice departure from traditional museums that are usually littered with “do not touch” and “no flash photography” warnings. Shapes, neon colors, video imagining, an upside-down bus, secret passageways, music, light installations, and the list goes on and on. One minute you’re in someone’s living room and then next you feel like you’re standing on a street in a foreign country.

While the website suggests allowing 90 minutes to two hours to explore, I can see how people would want to spend several hours touring around. There is so much to see and there is even a storyline that you can follow about what went on in the “multi-dimensional mystery house.” You climb up to go down and around, you walk into a closet and end up in an Alice in Wonderland scenario, and walk through a room you swear you have already seen only to see something totally new. It’s kind of like a funhouse but, instead of scare tactics and trick mirrors, it’s more mystery doorways, colorful artwork, and next-level creativity. 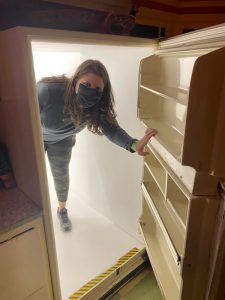 But to pull off this innovative experience, the group of misfit artists needed money. And they got it – from Game of Thrones novelist George R.R. Martin of all people. If it wasn’t for his $2.7 million, Meow Wolf wouldn’t exist. I find this interesting because Meow Wolf’s whole thought process is anti-establishment yet they needed millions of dollars to make it happen. Don’t get me wrong – I’m glad they did – but without Martin buying the abandoned bowling alley building there would be no venue for this type of art. And somehow it all worked because now, according to Forbes, “Meow Wolf has revolutionized the art world and accumulated enough capital to become a billion-dollar arts and entertainment company.”

Five years after its 2016 debut, Meow Wolf has become one of Santa Fe’s most popular attractions. As stated in Forbes, “Ticket sales from the installation’s roughly 550,000 annual visitors quickly set Meow Wolf on a course for expansion in the region” with two more art complexes coming. There’s even a documentary on iTunes and Apple TV called Meow Wolf Origin Story. 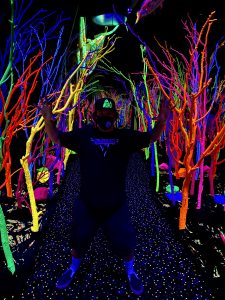 If you can’t make it to Santa Fe, second and third locations are expected to open in Las Vegas and Denver this year, along with future attractions in Phoenix and Washington, D.C. Like the Santa Fe location, they are all slated to be artistic, interactive, and immersive. If you go, give yourself time and have your smartphone camera ready.