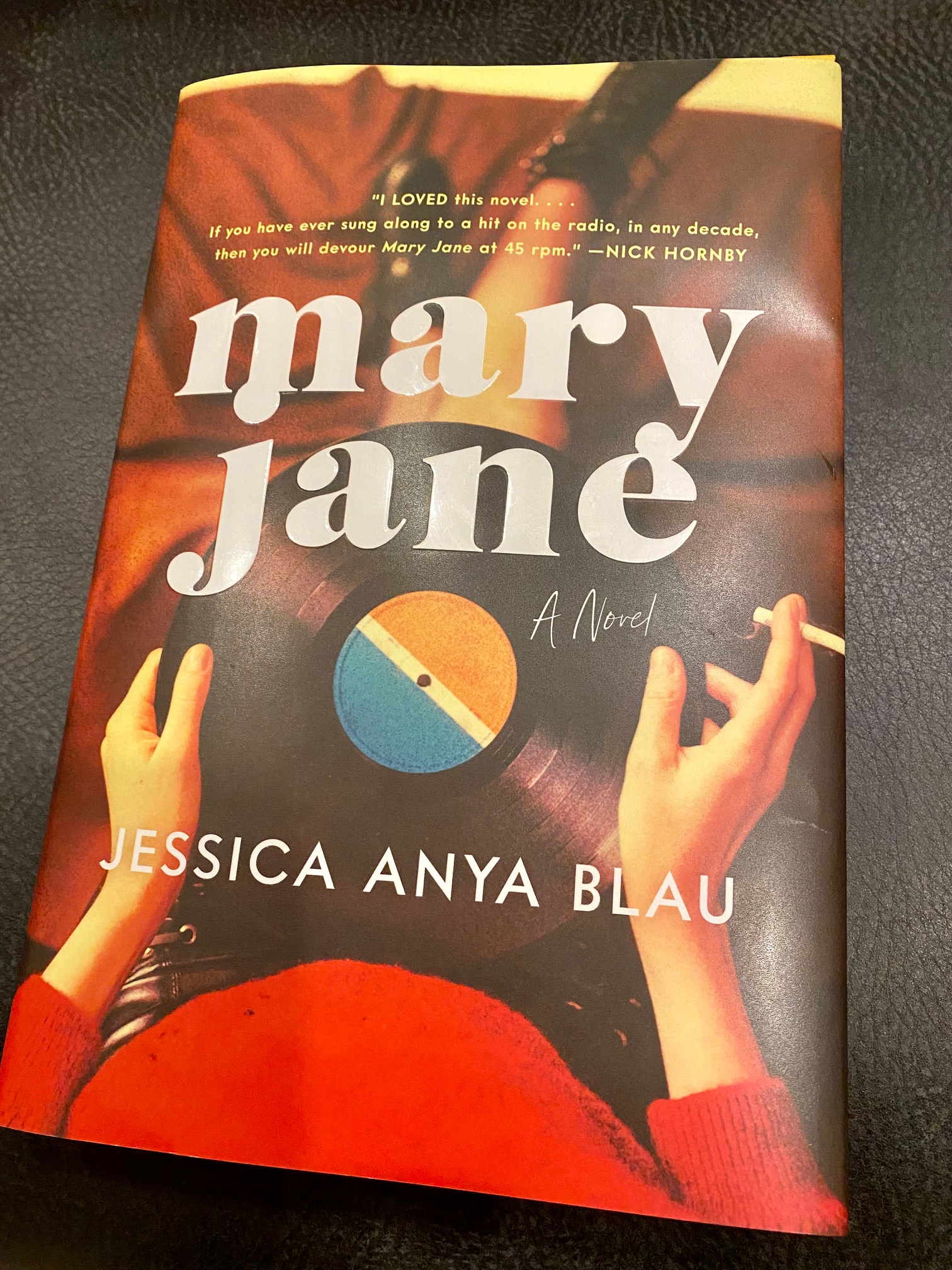 Here I am reading another novel. Actually, it’s better described as historical fiction because this is now the third novel I’ve read that features a similar disclaimer: “This is a work of fiction. Names, characters, places, and incidents are products of the author’s imagination or are used fictitiously and are not to be construed as real. Any resemblance to actual events, locales, organizations, or persons, living or dead, is entirely coincidental.” Either way, my nonfiction-loving self got talked into reading fiction because a friend recommended it based on the book jacket: “Almost Famous meets Daisy Jones & The Six.” Sold.

Written in the first person and narrated by Mary Jane, a fourteen-year-old girl living in Baltimore in the 1970s, the book depicts two very different households and the positives and negatives of each. Mary Jane is hired as a summer nanny for a five-year-old girl named Izzy Cone whose parents are laid back, sweet, and fun, but are also disorganized hippies who need to do some serious spring cleaning. Coming from a house of strict order and no emotion, Mary Jane sees a whole new world at the Cone house. Her parents don’t allow her to do anything  – not even something small like riding on a grocery cart – but she has no idea that her house is uptight until she’s exposed to something new. “Cart-riding was forbidden by my mother, who thought it was the childhood equivalent of racing a motorcycle without a helmet.” Mary Jane quickly learns what it’s like to be around loving people and, most importantly, learns a lot about herself. But it’s not just the Cone family she’s learning from – there is also the famous rock star and his movie star wife who move into the Cone house a week after she starts her job.

While music definitely plays a huge role in Mary Jane, and I can see why the book jacket references Daisy Jones and Almost Famous. The seductive nature of sex, drugs, and rock and roll is a major theme in Daisy Jones, Almost Famous, and Mary Jane, but ultimately everything goes back to relationships. In this book, Mary Jane and Izzy perfectly exemplify how sometimes family is found outside of bloodlines and acceptance of other people’s differences is an essential part of love. Rock star Jimmy and movie star Sheba are also important personalities because they show Mary Jane what she can learn from those who live alternative lifestyles. “It had never occurred to me that something that was against the law might actually be okay to do.”

I found some of Mary Jane’s interactions with her parents hard to read because they are stifling human beings who prioritize appearance over emotion and choose to constantly be critical rather than supportive of their fabulous daughter. They are also racist, anti-Semitic, judgmental, and, at times, mean. While Mary Jane’s mother has taught her daughter valuable skills– like organization, manners, and cooking – that serve her well in the hippie house of mess, her mother taught these skills for the wrong reasons. She’s more concerned about appearances than showing her daughter new things. Meanwhile, her father spends more time silently judging than speaking. Conversely, the Cones don’t care about appearance and are happy eating takeout in their disheveled home. The Cone house is messy and in desperate need of Mary Jane’s organizational touch – but it’s also welcoming, loving, and fun.

Overall, Mary Jane presents an interesting dynamic that demonstrates the clashing thought processes people had in the 1970s and how that shaped the next generation. Mary Jane’s parents barely speak – to her or to each other. That robotic lifestyle and constantly being corrected for anything and everything has turned this young girl into a worrier. Throughout the novel there is so much worrying about everything – including whether she buys the right snacks or stacks records correctly – because she is a product of her parents. But at the Cone house, she learns about herself and the world through the eyes, observations, and reactions of others.

As far at the writing goes, author Jessica Anya Blau (like Taylor Jenkins Reid) uses detailed descriptions to paint a vivid picture of who her characters are inside and out. Also, like Reid, Blau knows how to skillfully and realistically write dialogue. I couldn’t put this book down because there was a lot to relate to and think about in terms of 2022 versus 1970s. People will always be concerned about appearances (whether they realize it or not), racism still runs rampant, and sometimes people forget to have fun. Blau beautifully portrays unconventional relationships and how much can be learned from all types of people from all types of backgrounds. The author also demonstrates how music brings people together.

As a parent, I found Mary Jane’s bravery, observant nature, willingness to learn, and conscious decision to be herself inspiring. Since having Fleet I’ve realized how being silly and having fun should factor into everyday life. It’s so easy to get bogged down with crossing things off a to-do list, completing tasks, and working hard. All these things are important, of course, but having fun and being spontaneous is also important. My favorite line of the book: “Don’t ever let anyone tell you that fun isn’t important because, damn, if there’s one thing I’ve learned in my strange life, it’s that fun counts.” Amen.

“Her voice sounded like an instrument I’d never heard played before.”

“His voice turned to tossed gravel.”

“I wanted to wake up in that house, where I felt like I existed as a real person with thoughts and feelings and abilities.”

“Until I met Jimmy, I hadn’t understood that people you loved could do things you didn’t love. And, still, you could keep loving them.”

“I’d never been in a house where every space was crammed with things to look at or think about.”

“It had never occurred to me that sometimes dishes weren’t just dishes, that things could represent ideas in more powerful ways than the ideas themselves.”

“I couldn’t help but think how different I was these days. I was growing into someone new, new even to me.”

“What in the past had seemed normal suddenly felt abnormally hushed, quiet, and contained. It was like we were in a play that went on forever and ever without any dramatic tension.”

“I felt stuck in a time-warm atrium of segregated politeness.”

“Maybe a person’s standing in the community was an illusion…An imagined evil that created unnecessary rules.”

“My heart felt like a Slinky flipping down an endless staircase inside my chest.”

“I felt like I was breaking the law. And it made me smile.”

“It was like a fever that lets you see the usual world through the intensity of the unusual.”