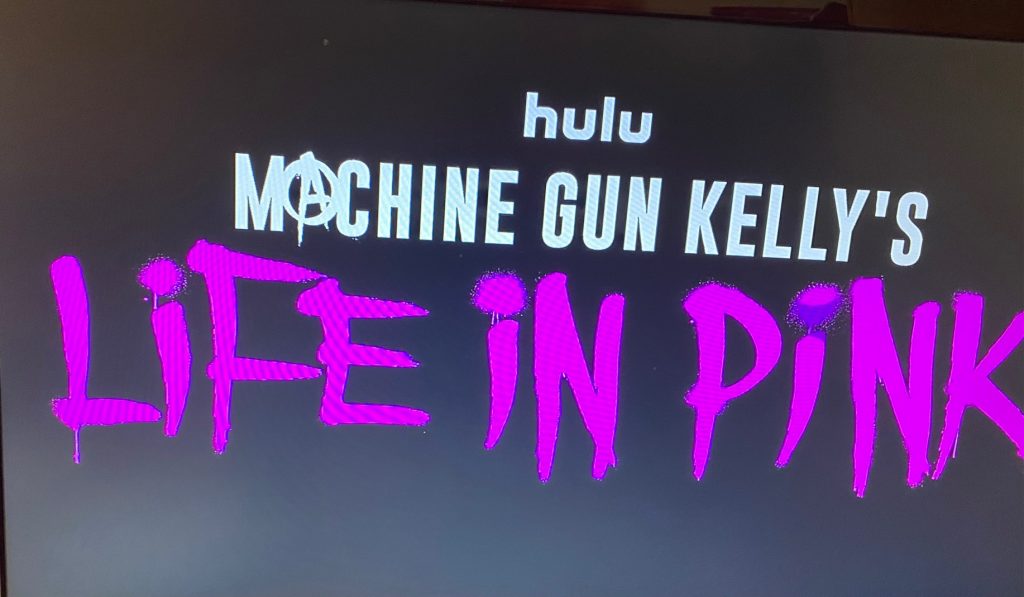 Machine Gun Kelly (aka Colson Baker) is not for everyone. With tattoos taking up most of the acreage on his body, numerous piercings, pink hair, and bedazzled outfits, he is definitely a polarizing figure. But he is also a classic “don’t judge a book by its tattoos” scenario – a fact I became aware of in 2016 when he appeared as Wes on Cameron Crowe’s Showtime series Roadies. Wes had his own style, odd hair, and showed off some interesting earring choices, but he was also smart, funny, and an excellent musician. Watch and listen:

Fast forward to two days ago when Hulu released Machine Gun Kelly’s Life In Pink – a documentary (mostly) about the last two years of his life and what he has gone through to be taken seriously. Hailing from Cleveland, MGK started as a hip hop artist who released four mixtapes between 2007 and 2010 before signing with Bad Boy Records. His 2012 debut studio album, Lace Up, peaked at number four on the Billboard 200. Until recently, he was probably best known by the mainstream world for his single “Bad Things” featuring Camila Cabello which also peaked at number 4 – this time on the Billboard Hot 100. In 2019, he released Hotel Diablo which is where the documentary begins.

In an effort, I guess, to prove a point and show how far he’s come, the film starts with a string of scathing social media posts and clips of television personalities saying that MGK is a sellout, a poser, has no real talent, etc. Clearly there are a lot of people out there who take one look at him and immediately make up their minds, but there are also clips of him winning two awards at the recent Billboard Music Awards and of television personalities like Kelly Clarkson and Jimmy Kimmel welcoming him as a guest on their shows. 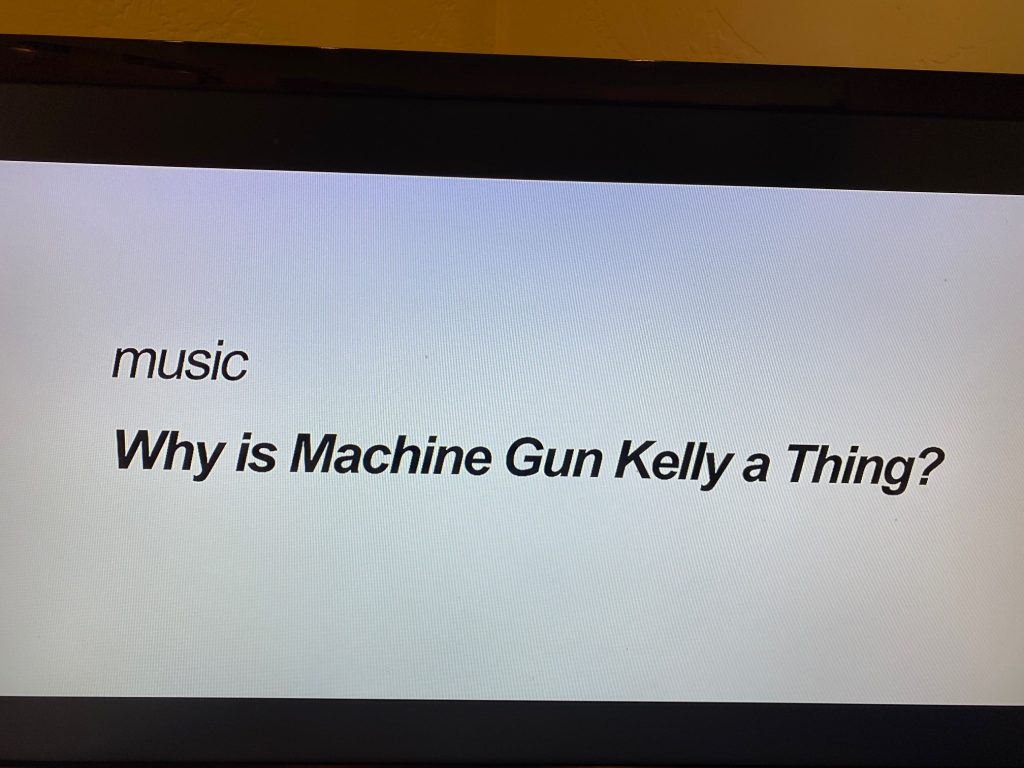 Life In Pink goes on to show that during Covid lockdown, when everyone was at home rather than on tour, MGK picked up his guitar and started posting videos on YouTube. All of the sudden he was getting positive attention for being a real artist. Some were shocked by his departure from hip hop (clearly those people never saw Roadies), some were impressed, and others called him a sellout. But one person in particular was very impressed – Travis Barker of Blink-182 – who befriended MGK and became integral in the release of his 2020 album, the aptly titled, Tickets To My Downfall.

When artists switch genres sometimes it goes well (i.e. Taylor Swift and Darius Rucker) and other times in doesn’t (i.e. Garth Brooks’ Chris Gaines era) so MGK was rightfully ready for the haters to give him a hard time. But he came out on top as the album debuted at number one on the Billboard 200 – a huge achievement for such a young artist moving from hip hop to pop punk.

But this is where the film starts to drag a little bit as the next large section focuses on MGK’s obsession with proving that Tickets To My Downfall was not a fluke by relentlessly recording and releasing another number one album. Although the narrative depicts him working tirelessly to perfect his music, it also shows how his workaholic process took a severe toll on his fiancé Megan Fox, his 12-year-old daughter, and his own mental, emotional, and physical health. He achieves his goal – Mainstream Sellout (once again appropriately titled) debuts at number one – but it cost him part of his sanity. 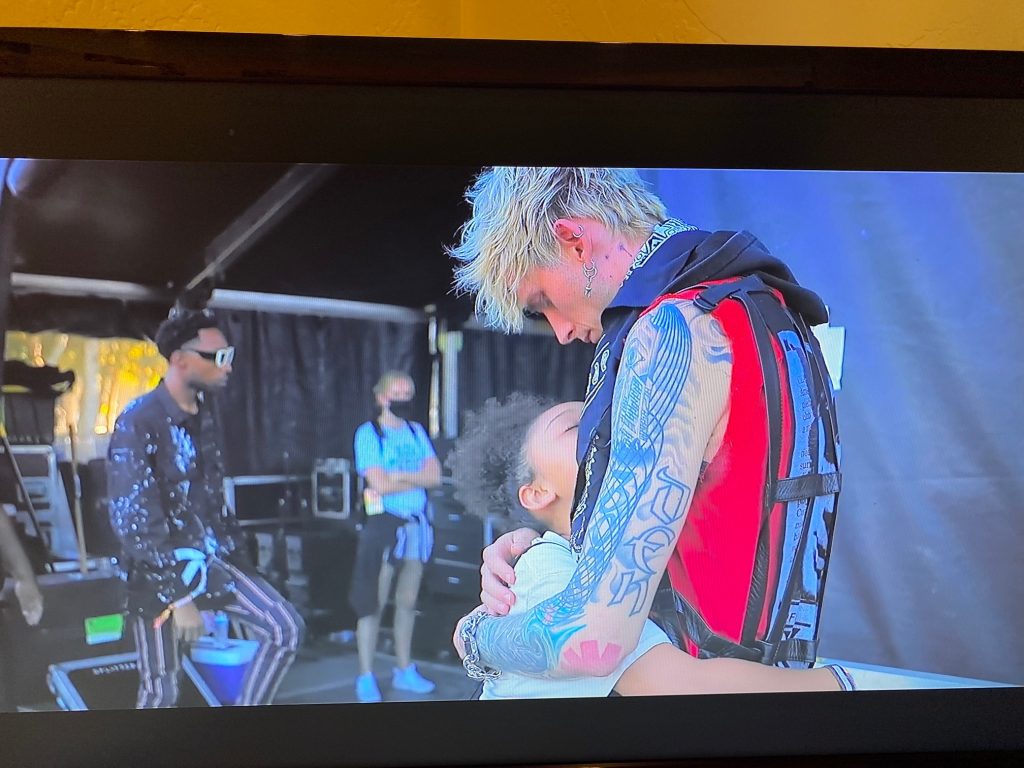 While his daughter appears in footage and interviews (mature for her age, she weighs in on her dad’s compulsive work habits and kicking hard drugs, among other topics), the viewer only sees Fox in passing which is a bit odd. I would have liked to hear what she has to say about many of the topics discussed in this movie. In fact, more interviews from multiple people would have elevated the narrative – the ones with Barker are the best.

So is Life In Pink worth watching? Yes. But there are a few issues. First of all, it’s too long. Clocking in at 1 hour and 43 minutes, the repetitive footage of MGK in the studio and doodling while not looking at the camera is too much. Also, in almost every scene, he’s either drinking or smoking weed. We get it dude, you like imbibing. The flashback footage of his Cleveland upbringing is great but the current scenes of him in his fancy house wearing Dolce and Gabbana, juxtaposed with his daughter sitting in front of a house that there is no way she currently lives in, doesn’t make sense.

Fans of MGK will love the film. Those who are on the fence about him will definitely learn something new and, most likely, will see him in a different light. In the beginning of the movie he says, “I don’t think anyone saw me coming.” No question.