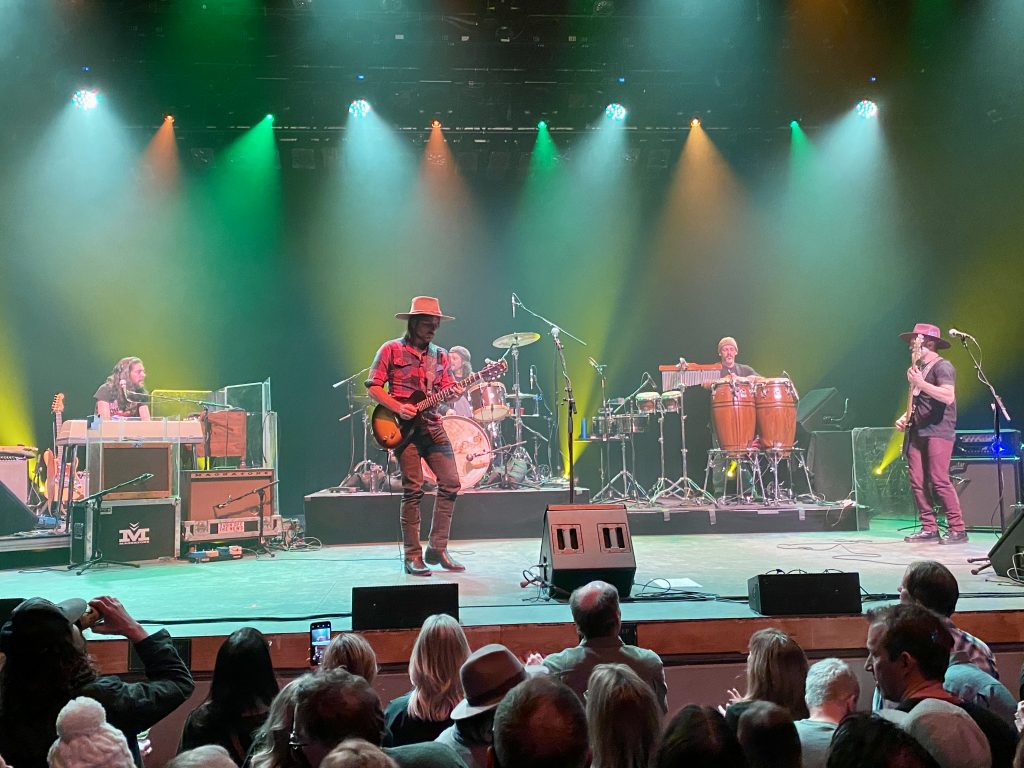 Seven years ago I interviewed Lukas Nelson about his upcoming show at the Vilar Performing Arts Center in Beaver Creek. At the time, he was known more as Willie Nelson’s son than an artist in his own right and tickets were $20. Times have changed. Tickets to last night’s show sold out quickly and were significantly more expensive. And worth every penny. Concluding a five-night mini tour through Colorado (the band played in Denver, Boulder, and Aspen), last night’s performance demonstrated the star power of Lukas Nelson.

Clad in a flat-brimmed fedora, a flannel shirt, jeans, and cowboy boots, Nelson could have been anyone living in Colorado. Except he has long hair, a megawatt smile, and effortlessly plays his guitar with equal parts ferocity and rawness. He can rock hard with his extremely talented rhythm section or he can sing softly all by himself. While there is definitely a twang in his voice that reminds the listener that he is related to Willie, Lukas has his own style. He sings outlaw country tunes about getting high and into trouble but then seamlessly transitions into singing about saving the environment.

Highlights from last night included “Die Alone,” “Just Outside of Austin,” “Turn Off The News,” “Something Real,” “Forget About Georgia,” and, of course, “Colorado.” The band also covered Crosby, Stills, Nash & Young and Simon & Garfunkel – clearly, they knew their audience. There was also a point where Nelson played his guitar with his teeth. The guy knows how to put on a show.

Unlike some artists who show up to play their gig, say hi and bye to the crowd, and leave, Nelson was very gracious and talkative. He introduced his band at the beginning of the show and again later in the show. He introduced himself as well – which was a nice touch – and told stories and anecdotes before some of his songs. Nelson also mentioned “playing shows with Dad” and other artists, and constantly had a big smile stretched across his face. The entire band was looked and played like they were genuinely happy to be at the Vilar – like it was their pleasure to perform. Well, it was a pleasure to be in the audience.

I’m glad Nelson has gained more notoriety in the past few years after co-producing the music for A Star Is Born because he deserves the recognition. He wrote songs with Lady Gaga and his entire band appeared in the film as Bradley Cooper’s band. Additionally, Nelson won a BAFTA Award for Best Original Music and a Grammy Award for Best Compilation Soundtrack for Visual Media.

There is no question that this tour is the beginning of something big for this band and I feel lucky to have seen them in a 500-person venue. Next time Lukas Nelson & Promise of the Real return to Colorado I predict they will sell out Red Rocks.