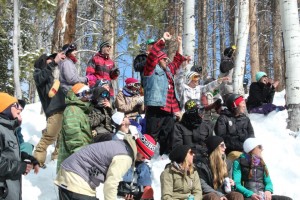 Turns out all snowboard contests are not created equal. Well actually Log Masters is technically not a contest – it’s a game that has been played since 2001 in the woods of Beaver Creek. At the crest of the millennium, Brian “Wookie” Fleming and a few buddies came up with something innovative – sliding 18 logs consecutively and using golf rules to keep score. And then they decided to name the event after one of the biggest championships in professional golf – The Masters –and award the winner with a green jacket.

In its infancy Log Masters was a very small, underground event. 12 years later it has become an invite-only showdown that puts some of the most talented snow athletes in the Rocky Mountain region to the test. While some riders travel from as far as Wyoming, Utah, Breckenridge and Boulder, others just drive up Highway 6 from Vail. And then of course there is the Beaver Creek home team aka Red Team (RDTM) who are undeniably the local favorites.

Although the event continues to fly under the radar to some degree, once people find out the date – which is usually a few weeks in advance for some and a few days ahead of time for others – the buzz begins. During those couple of days leading up to Log Masters the conversation and excitement around town is undeniable. So much discussion about who is going to be there, the difficulty of the course, the snow conditions, whether or not “powder rules” will apply (they did this year thanks to some great March snow), the location of the after party and all the other fun details that surround being part of Log Masters. It is without a doubt the most anticipated day of the year for brave shredders who put their limbs on the line and the spectators who watch in awe.

The night before the big day the Vail Valley was very quiet as people were setting early alarms and reminding themselves of the time change. This year everyone met up at the Dusty Boot to check in, eat and hydrate, find out which group they were in and who their judges were for the day. The eagerness and enthusiasm was palpable and the riders wanted to get going. They know the logs are big, the stakes are high and that there would be a lot of hiking involved in some very deep snow. They also know that the masses will be watching – over 100 people showed up throughout the day to watch the epic talent, cheer on their friends and significant others and be part of something that’s bigger than them.

There are several factors that set Logs Masters apart from other snowboard events and contests. First of all it has a “by us, for us” feel to it meaning that it is not organized by corporate sponsors who have never strapped into a board and have never been to Beaver Creek. Instead it is organized by people who love snowboarding but are well-connected enough to attract impressive prizes and important people in the industry. Additionally, everyone knows that Wookie and friends spend several weeks making sure the course is safe, challenging and fun. He wants the riders and spectators to experience something they will remember and enjoy so much that as soon as this year’s event is over they immediately begin counting the days until next year.

Following the event everyone gathered at Montana’s for the after party and patiently waited for the results. Food and drinks flowed and the atmosphere was bursting with excitement –everyone was stoked to be there. As the sun went down a variety of prizes donated to Log Masters by various snowboard companies and local establishments were raffled off to lucky winners. The temperatures began to drop and everyone was huddled around the display table where Wookie was on the mic to announce the winners. When local Beaver Creek kid and longtime logger Ricky Rodriguez was announced as the winner, the Montana’s deck erupted with joy, champagne and excitement as the green jacket was brought back to the home team. Tears were shed as Rodriguez clawed his way to the front and when he put on the green jacket the adrenaline was so intense and the honor so great that he tore through it like the Incredible Hulk. You’ve never seen such pride.

Watching Rodriguez bang on the table in excitement, scream to the sky, jump around and hug all of his friends was a clear indication of how much Log Masters means to everyone in the Vail Valley. It means a lot to people because they enjoy watching their friends do what they love the most and give it their very best. It means a lot because Wookie loves snowboarding and wants to watch the next generation of shredders do great things. Nobody enjoys passing the torch more than he does because he is the heart of Log Masters, the heart of Beaver Creek and wants to help talented riders achieve greatness.

Log Masters is more than just an annual snowboarding event that takes place in the woods of Beaver Creek. It is a day that people look forward to every year and care about so much that they adjust their work schedules to ensure their attendance. The footage and photos that appear on Facebook are incredible and the support, congratulatory comments and continuous discussion help tell the story of an event that one can’t help but want to be a part of year after year.