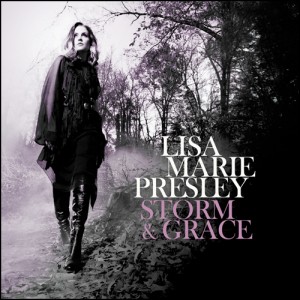 On May 15, Lisa Marie Presley will release Storm and Grace – her first album in five years and it will also be her Universal Republic/XIX Recordings debut. The album was produced by 12-time Grammy winner T Bone Burnett – the man who has produced albums for John Mellencamp, Greg Allman, B.B. King and Willie Nelson, just to name a few.

According to reports, Storm and Grace will be very different from 2003’s To Whom It May Concern and 2005’s Now What – both of which debuted in the Top 10 of the Billboard 200. Instead, this record is said to reflect Presley’s Southern roots – we’ll see what that means.

I can’t find any of the tracks to listen to yet but I’m chomping at the bit. One of the main reasons I like Presley is that her music is gutsy, edgy, and most of all, it exudes history. She knows something and has been somewhere and even though people expect more from her based on who her father was and what he achieved, she still maintains her own voice.

The song “Lights Out” from To Whom It May Concern is one of my favorite songs ever by a female vocalist:

That’s some serious shit and she sings it well.

Another reason I like Presley is that she is not afraid to show emotion but is still a tough girl. Her life is an open book –I guess it has to be –and she doesn’t fight it. Instead, she writes and sings about it with seemingly no regret and that’s what makes her great.

Let me know if you can find any of the tracks – I can’t wait to hear what she’s come up with.