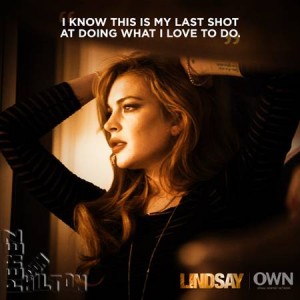 The older I get the more I realize that there are people out there who struggle just to live. No matter the topic or issue, there are certain people who always have an excuse and it’s always something with them. Lindsay Lohan is one of those people.

At age 11 she starred in her first major movie and for the first eight years her films made millions. But at this point those films seem like they were a long time ago and Lohan is only 27. The reason it feels that way is because in the last seven years she has been to rehab six times, has served time in jail and is still on probation. There was also tabloid story after tabloid story talking about her tardiness and the fact that she was difficult to work with, As a result of all her craziness she has, unsurprisingly, not starred in any movies. Instead she has done mostly television guest appearances and fashion shoots. So I’m assuming when Oprah Winfrey approached her to film a documentary series for her OWN network, Lohan jumped at the chance to get some exposure.

Directed by Emmy-nominated filmmaker Amy Rice, Lindsay follows the “movie star and media sensation” on her journey through recovery following a very public period of crisis. And by “media sensation” they mean tabloid sensation.  I understand that our celebrity–obsessed culture likes watching stars fall but regardless of the millions that her movies made I don’t see how she is “one of the most talented young actresses of her generation.” Instead I would give that kind of credit to actresses like Ellen Page, Lea Michele and Keira Knightley.

I understand that the OWN network probably thought people would like to watch Lohan’s craziness – I did – but unless she got paid a ton of money this wasn’t worth it for her. Instead of viewers seeing a stable celebrity working to make themselves a contributing member of society what we see is someone who can’t get anywhere on time and has so many articles of clothing and accessories that she required an entire warehouse just for her wardrobe. We see someone who constantly talks about “staying away from the chaos” when in fact she creates her own chaos.

Every time she goes out of town the crew is not allowed to film her and she comes back with excuse after excuse as to why she was in the tabloids for another disaster whether it’s falling off the wagon, the police being called in Miami or her complaining about how the paparazzi misconstrue her every move. Nothing is her fault, she doesn’t understand why she is serving community service hours and she treats the people who work for her like the help when they are simply trying to get her out of bed at 3 p.m. to do her job. And let’s not forget her life coach who ends up quitting midway through the series because she decides she no longer wants to deal with Lohan.

Throughout the eight-episode series, Lohan constantly acts like a spoiled brat but she is candid which I’m assuming is what Oprah wanted from her. She admits to having a miscarriage, talks about the list of people she slept with that somehow ended up online, her issues with her mom’s new book hitting the stands (don’t even get me started on Dina Lohan – she is awful) and how she thought she needed to consult with Miley Cyrus before introducing her at a holiday concert.

As advertised, the series was an unflinching look into Lohan’s life but if she didn’t want cameras on her at all times she shouldn’t have signed up. And although Rice exercises a lot of patience and is clearly a talented filmmaker, there wasn’t a whole lot to be done with a celebrity, who at such a young age is constantly breaking down while blaming everyone but herself. In the future I hope Oprah chooses someone a little bit more worthy of Rice’s time and talent. I’m all for a good behind the music story but unfortunately this documentary series ended up being more of a cautionary tale.