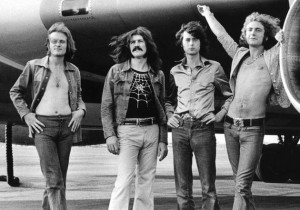 Although Led Zeppelin is one of my favorite bands of all time and I always love the idea of unreleased material, sometimes I think bands let the deluxe/bonus albums that they remaster and then reissue get out of control.

Packaged as an “extensive reissue program” that begins this summer, Led Zeppelin’s first three albums will be reissued as deluxe editions. Eventually, all nine of the band’s studio albums will be remastered by guitarist and producer Jimmy Page and each record will have a companion bonus disc of previously unreleased studio and live tracks that the group recorded around the time of the album.

The new versions of Led Zeppelin, Led Zeppelin II and Led Zeppelin III will hit stores on June 3 and will be available in a variety of formats including CDs, LPs, vinyl and digital download. The group is also putting out a limited-edition “Super Deluxe Boxed Set” of each album that includes all of the audio on CD and vinyl, as well as a high-definition audio download card, a hard-bound book containing unseen photos and memorabilia and a high-quality print of the album cover, the first 30,000 of which will be numbered. The edition will also contain a replica of the band’s original Atlantic press kit.

Whew! That’s a lot of extras, deluxe items, rare, limited-edition items! Don’t get me wrong – I think it’s all very cool but is it worth it? I brought up this same question in my September 13, 2013 post when I wrote about Nirvana releasing their 20th Anniversary remastered version of In Utero.  Although everything the four-disc package offered was very cool and I’m sure Nirvana diehards loved it, I wondered if it was too much for the average fan.

The companion discs of the Zeppelin remasters promise rough mixes, backing tracks, alternate versions and new material and the deluxe edition of the group’s 1969 debut will feature concert recordings, set lists and unheard live versions of multiple songs. And the list goes on and on.  Again – that’s a whole lot of extras! Are they necessary?

In terms of sound quality, one could argue that all this remastering is necessary since it hasn’t been done in 20 years. Some would say that Zeppelin songs don’t sound right when it comes to the digital format while others would say, “What the hell are you talking about?”

It will be interesting to see if people are willing to spend the money on the revamped Zeppelin gems or if fans decide they already have all the songs in several formats and don’t need any more deluxe/bonus material.