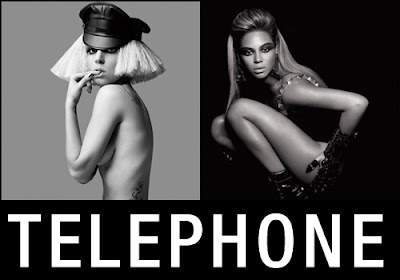 Have you see the new video for the song “Telephone” featuring Lady Gaga and Beyonce? Wow! In an age where music videos are all but an afterthought, two of current music’s most dynamic women get together and turn out one of the most exciting videos I’ve seen in very long time.

-Those are some badass convicts!
-Was that jail sequence a deleted scene from Chicago?
-Running almost 10 minutes long it’s like a combination of Madonna’s 80s flick Who’s That Girl, Thelma and Louise and Kill Bill.
-In fact, was that Beyonce bailing Gaga out of jail and driving off in the P***y Wagon from Kill Bill???
-Did Gaga really just debut a pair of sunglasses made entirely of cigarettes? Your move, Elton John!
-This video is full of black leather, skulls and makeup that would make Motley Crue blush.
-Beyonce saying the word “motherf*****” like she means it? Never thought I’d see the day!
-The costumes, colors and cleavage are out of control!
-All of the colorful subtitles make me feel like I’m watching VH-1’s Pop-Up Video.
-The video ends with “To be continued…” and I’ve never been so excited for a sequel!