On April 5, 1994, Kurt Cobain, who is largely responsible for bringing grunge and alternative rock to the masses, tragically ended his own life. His death certificate states that his death was a result of a “contact perforating shotgun wound to the head” and concludes that it was a suicide. 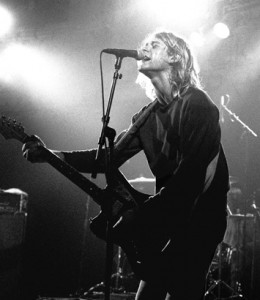 At that point the band had released three studio albums: 1989’s Bleach, 1991’s Nevermind, and 1993’s In Utero. By January 1992, Nevermind had changed the face of music – so much so that it dethroned Michael Jackson’s Dangerous and slid into the number one spot on the Billboard 200 chart. The Recording Industry Association of America has certified the album diamond (at least 10 million copies shipped), and it has sold at least 24 million copies worldwide.

While over two decades have passed since the release of Nirvana’s final studio album, In Utero, their music still runs deep. And I don’t think that will ever change. Cobain’s words, aggressive guitar-playing, and overall demeanor towards fame hit a nerve with a lot of people of all ages and backgrounds. Whether he liked it or not, he was (and continues to be) a spokesperson for a generation. Play the first few chords of “Smells Like Teen Spirit” for anyone over the age of 30 and they will recognize it. In fact, they will probably reference the music video as well.

Although a lot has happened within the Nirvana family over the last 22 years, the last five years have proved to be a little more notable for a few reasons. Interestingly, all of these milestones have taken place during the month of April:

If you’re a Nirvana fan tune in to 107.9 Radio Free Minturn, www.radiofreeminturn.org, or the Tune In app on your iPhone or iPad from 5 to 7 p.m. MST tomorrow night.