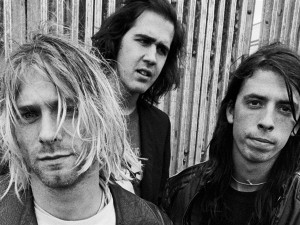 Turns out April is going to be a historic month for Nirvana and the late great Kurt Cobain.

Next week the band will be inducted in the Rock and Roll Hall of Fame so expect one hell of a speech from Dave Grohl. (Have you seen his 2103 SXSW keynote speech? Go YouTube it right now – it’s incredible). Additionally, the town of Hoquiam, Washington – where Cobain lived in for a short time – will celebrate its first-ever Nirvana Day. (Last month Cobain’s hometown, Aberdeen, Washington, honored him with its first-ever Kurt Cobain Day on his birthday, February 20).

On a positive note, crazy Courtney Love announced today that she hopes to make a biopic, documentary and musical about Cobain. But for it to happen, Love wants to be sure the project is put in the hands of creative professionals who will tell a great story and create something that respects Cobain’s memory but it also honest. Of course I agree with all of that and I hope it happens but you never know what crazy Courtney has up her weird sleeve.

Random side note – apparently a Nirvana fan is looking to purchase Cobain’s childhood home and turn it into a museum. While I appreciate people wanting to pay homage to the singer, this one sounds a little kooky to me.

No matter what happens with the musical, I’m glad that Nirvana is getting the rock and roll recognition it deserves and that people continue to talk and care about Kurt Cobain.  I still play Nirvana songs on my radio show, in my car and on my iPod and they never get old. It’s hard to believe that Nevermind is arguably a “classic rock” album at this point but classic it is – there will never be another Nirvana and there will most definitely never be another Kurt Cobain.