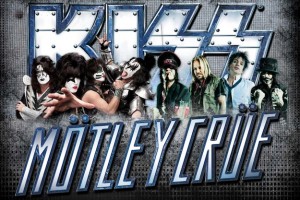 If you want to see an incredible rock and roll show do yourself a favor and and buy Kiss and Motley Crue tickets. To say that they showed Denver how it’s done last night is the understatement of what has been an amazing summer of music.

Motley Crue kicked off the double-bill night with “Saints of Los Angeles” and the party was underway. Despite the decades of decadence Vince Neil’s voice has held up very well and so has the musicianship of the rest of the band. Nikki Sixx and Mick Mars killed it on bass and lead guitar and Tommy Lee – on his rollercoaster drum kit – was a force. Everyone in that band is a showman – even the much older and quieter Mars.

They played all the hits the crowd wanted to hear including “Shout at the Devil,” “Wild Side,” “Live Wire,” “Girls, Girls, Girls,” “Dr. Feelgood” with “Kickstart My Heart” as the killer grand finale. Between Lee’s rollercoaster rides, the strippers on stilts and the pyrotechnics, the show was a rock and roll experience I’ll never forget. It’s no wonder that the band that has been described as the “World’s Most Notorious Rock Band” has been performing since 1981 and has sold more than 80 million album copies worldwide.

Next came KISS – a band that began in the early 70s, gained popularity when they released one of the first live albums ever and has the most gold albums of any American rock band to date. Their glitzy costumes, silver platform boots and glam makeup were so fun to see and the fact that Gene Simmons and Paul Stanley can still nail the vocals and guitar licks is incredible. And of course the fire-breathing, blood-spattering, tongue-wagging, acrobatics were really something. While KISS didn’t play all the classics the crowd was hoping for, they did tear through a few favorites like “Detroit Rock City,” “Shout It Out Loud,” “Lick It Up” and encored with a “Rock N Roll All Nite” that literally exploded confetti.

Last night was not just a concert it was an event and that’s because not only were the performances amazing but the people-watching was unparalleled and every person in attendance was having fun. The leather, high boots, studs, fake boobs and spandex was something out of a movie and the vast age range of concert-goers included everyone from 60-year-old bikers in Sturgis gear to young kids in full KISS makeup. (They will love seeing those photos when they are 25!)

So even though these bands have been touring for what seems like forever go see their show. It’ll be one of those nights you’ll talk about for years.