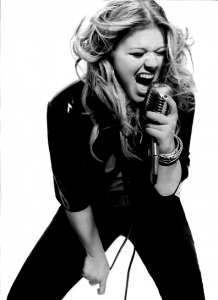 A few weeks ago, my mother gave me a New York Times article about Kelly Clarkson’s latest album and rise to fame. While I’ve always been a Clarkson fan, I was a bit surprised at the enormity of the spread. It was great to read an article that was both informative and entertaining about a pop singer who won the inaugural season of American Idol and has been crushing it ever since.

Fifteen years ago, Clarkson earned herself a record deal with RCA which she has notoriously talked about as not being the best fit. Despite the turmoil she allegedly endured, her debut single, “Before Your Love/A Moment Like This,” topped the US Billboard Hot 100 chart and became the best-selling single of 2002. Since then she’s been turning out hit records with incredible consistency:

What I like most about Clarkson is that she has an tremendous voice and she can do whatever she wants with it. Of course, her rock-inspired bangers are my favorite (i.e. “Miss Independent,” “Never Again,” and “Whyyawannabringmedown”) but I also like the ballad “Because of You” and her new pop single “Love So Soft.” With what has to be a three to four octave range, her voice transcends multiple genres and I love that. And clearly everyone else does too as Clarkson has sold over 25 million albums and 36 million singles worldwide, and has charted over 100 number one songs. She has also earned three Grammy Awards, three MTV Video Music Awards, four American Music Awards, and two Academy of Country Music Awards. She is currently an advisor on The Voice and has been a guest mentor during past seasons. Clarkson also recorded a solo version of “It’s Quiet Uptown” for The Hamilton Mixtape which was released as a promotional single for the album.

The music industry needs more people like Clarkson in its arsenal – a singer who is relatable and spans multiple genres. Keep up the good work Kelly – you’ll be celebrating two decades in the business before you know it.