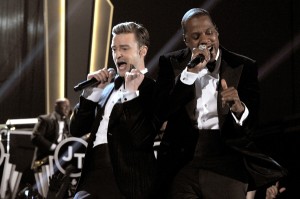 Following a triumphant return to the Grammy stage and music in general, Justin Timberlake has released a new video to go with his new single “Suit & Tie.” The song will appear on his latest record, The 20/20 Experience, slated for release on March 15 (which is the Ides of March for those playing along at home).

With a little help from his friend Jay-Z, Timberlake is giving his fans new music for the first time in seven years. Yep, you read that right – it’s been seven years since the release of FutureSex/LoveSounds which produced six singles including number-one hits “SexyBack,” “My Love” and “What Goes Around…Comes Around.” The album received several Grammy Award nominations, including Album of the Year and Best Pop Vocal Album, has been certified multi-platinum in many countries worldwide and has sold over ten million copies.

As much as I like Timberlake I think the new video is better than the song. Shot in black and white, the video depicts Timberlake and Jay-Z channeling their inner Frank Sinatra. Featuring booze, women, old school microphones and a baby grand piano it bleeds cool and so do they. But in an age where music videos aren’t as popular as they used to be (even with YouTube) the actual music really needs to hold up and I don’t think it does here.

The good news is that both Timberlake and Jay-Z are the ultimate entertainers. They are so talented and so famous that they are constantly rewriting the rules of cool and when two heavyweights like this get together it’s hard to go wrong.

Maybe I just want it to be more rock and roll because that’s what I like. Maybe the song will grow on me. Either way, the video is great, Timberlake and Jay-Z continue to be at the top of their game and I’m always excited to see tremendous talent joining forces.