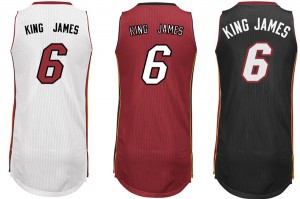 Why is the NBA entertaining the idea of putting nicknames on the jerseys of their players? Is the National Basketball Association becoming an intermural coed basketball team or an adult kickball/beer league?

As much as I like nicknames there is no reason to have “King James” for LeBron James or “KG” for Kevin Garnett. It’s just unnecessary and the fact that the NBA might allow Miami Heat players and Brooklyn Nets players to wear nickname jerseys in “at least one of their four matchups this season” is ridiculous. Which matchups constitute nickname jerseys? Are some matchups more formal than others? Give me a break.

The NBA has yet to make any kind of formal announcement but for now only the Heat and the Nets would be taking part. In addition, it is unclear how many times the teams would wear the nickname jerseys or if they would ever wear them against other opponents. However, players have already been asked to submit what names they would want on the jerseys.

I think it’s hilarious that people are trying to guess what nicknames players would use: Will Dwyane Wade choose “Three” or “D-Wade”? Will Paul Pierce select “The Truth”? Will Garnett use “KG” or “The Big Ticket”? The answer: Who cares?

The only people I can think of who would have any interest in these jerseys would be those die-hard fans who paint their faces two different colors or kids. Additionally, other than camp counselors or intramural sports teams the only example of teams I can think of that have used these types of jerseys was the short-lived XFL.

Lasting only one season (2001), the XFL permitted players’ jerseys to be stitched with whatever words they wanted with the most popular jersey being that of Las Vegas Outlaws running back Torrold DeShaun “Rod” Smart who wore “He Hate Me.” Although Smart did have a post XFL career- he signed with the Philadelphia Eagles and then spent four seasons with the Carolina Panthers, 2002–2005, playing in Super Bowl XXXVIII – Smart will always be best known as “He Hate Me.”

So does that mean I’m wrong and that nickname jerseys could be the next big thing with the NBA? Will it turn into millions of dollars in apparel sales because people will have to have these novelties? I guess anything is possible but when Bengals player Chad Johnson legally changed his name to Chad Ochocinco in 2008 people his jersey looked absolutely ridiculous. But the NFL had no choice – Johnson changed his name legally so technically it was not a nickname.

It will be interesting to see what the NBA decides and if they do decide that nickname jerseys are the way to go it will be even more interesting to see how people react. Will they just not care or will it catch on? Will people think it’s cool to buy nickname jerseys and wear them around? Maybe I’ll get t-shirts made that say “Writer Lieff” and start passing them out around the Vail Valley…