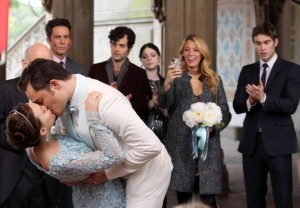 Last night Gossip Girl came to an end after six years of high school and post-high school drama and fans could not have asked for a better sendoff.

-Dan Humphrey is Gossip Girl! Nice! I love that the explanation is that all those years ago he decided to write himself into the Upper East Side world. Brilliant.
-Blair and Chuck get married and in a flash forward five years in the future they are happy and even have a son named Henry.
-Also in the flash forward, Dan and Serena get married and Nate is running for Mayor or New York and is apparently so successful with The Spectator that the newspaper has its own private jet. (I wish!)
-Rufus ends up with Lisa Loeb which is a nice way to wrap up the 90s music theme that has been a common thread throughout the series and Lily ends up with original baby daddy William (much better than adding another husband to the list).
-I loved the quick cameos from former pivotal characters like Vanessa and Juliet. The Mayor Bloomberg cameo was fun too. But my favorite of course was the voice of Gossip Girl, Kristen Bell, making an appearance alongside Rachel Bilson (formerly of The O.C.) in a scene that showed the two rehearsing for the movie version of Dan’s book. Fantastic.
-Ivy finally gets what she deserves along with the best line of the episode delivered epically by William: “You’re a Lifetime movie called “Nobody Gives a Damn: The Ivy Dickens Story.”

What’s interesting about Gossip Girl is that over the years I realized it had a lot of similarities to The O.C. and to Sex and the City. The former makes sense because both shows were created by the same person and the latter also makes sense because they were both filmed on location in New York City for a reason.

-There are so many similarities with the main characters. Here are just a few examples:

Serena and Marisa are both rich party girls with troubled home lives.
Dan and Seth are outsiders trying to fit in.
Rufus and Sandy are cool dads who give sage advice.

-Both shows are described as “love letters” to NYC and rightfully so as they both have subsequently launched tours that people go on just to see where the characters spent their time.
-Both shows ended with the same song – Florence + the Machine’s “You Got The Love”

Going back to The O.C. – just like with Gossip Girl I thought the final season of the show was a five (at best) on a scale of 1-10 but the finale was very well done. In the finale of The O.C. there were lots of flashbacks and nostalgia which is always good when a popular show ends and I like that it came full circle – with Ryan becoming a successful architect and helping a kid in need.

Sometimes the ending is the hardest part to write and I really appreciate Schwartz’s ability to go out on a strong note while still maintaining surprise, cleverness and managing audience expectations.

We’ll see if Schwartz’s high school success continues his strong run with The Carrie Diaries. No surprise it is set in New York City and is a prequel to the original Sex and the City television series. Set in the 1980s, the show will follow character Carrie Bradshaw during her years in high school and debuts on January 14, 2013.