It’s been fourteen years since I wrote about Josh Malay. Fourteen years ago, I was a sophomore at the University of Colorado, Boulder and a freelance writer for the school’s Campus Press 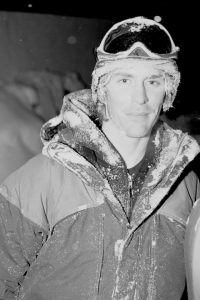 newspaper. When I found out that Malay, who was an acquaintance of mine at the time, passed away while snowboarding in Spain, I knew I had to write something. Even though I didn’t know him that well, the interactions I had with him were so positive, kind, and fun that I felt writing about him was the right thing to do. He was a good guy who had lots of friends and when news of his death hit Eagle County it was like the music at a party coming to a screeching halt.

I initially met Malay while he was working at legendary Beaver Creek snowboard shop The Otherside. I remember his punk rock look, his friendly smile, and his willingness to answer my endless string of questions about snowboarding. After fifteen years of skiing, I had finally decided to switch to snowboarding and learning a new sport in my twenties was rough! He taught me how to tie my boots in a way that would keep them from unraveling. He said if I tied them the way he showed me, my feet and calves would stop hurting after a day of riding. He was right.

The Boulder connection I had with Malay was when he won the 2003 Heavy Metal on the Hill snowboard competition – an event I covered for the Campus Press. Years later I showed Wookie some of the photos I took (with black and white film) of the competition and it turned out that Stephen Laterra was there as well. In addition to interviewing Malay that night, I also met and interviewed his childhood friend and fellow Minnesota native Pat Milbery.

The last time I wrote about Malay I hadn’t met Wookie yet – it would be another month or so until I was introduced to him– which is why he isn’t quoted in the 2004 Campus Press article. Over the years he’s told me so many Malay stories it’s hard to keep track. We even have a piece of his artwork hanging in our house. Like me, and probably so many others, Wookie met him for the first time when he strolled into The Otherside. It was after a mountain bike ride and Malay was working – they became instant friends. Although they didn’t know each other that long, Wookie recognized his talent right away. In fact, he convinced Burton to keep Malay on as a sponsored rider.

At the time Malay was gaining notoriety – especially after his Snowboarder magazine cover. That photo is classic local Eagle County as it features Malay performing a frontside boardslide down a fire escape in the (still) abandoned mining town of Gilman. That cover catapulted him into the professional world of snowboarding and earned him sponsorships with Santa Cruz, Grenade, and Oakley, among others. He was becoming a local hero.

On February 20, 2004, nine days before his death, the Vail Daily ran an article called “Josh Malay is a nice guy … and other exciting revelations.” No truer words. Reading the article all these years later is eerie because the writer mentions all of Malay’s upcoming career

opportunities: “One of those opportunities is a trip set up by Transworld Snowboarding magazine to the Pyrenees for an editorial piece, for which Malay will depart for this coming Tuesday.” This interview was most likely the last one he gave before leaving on his trip.

But instead of that sad note as the takeaway, I want to highlight how the writer repeatedly describes Malay as a nice guy and how it was a pleasure to ride with him and watch him ride. “Josh Malay may not only be the best snowboarder in the Valley, he might also be the most genuine.” There is no question that Malay was providing positive association for a sport that was (and in some ways still is) considered a renegade culture. I also like how all the quotes sound exactly like the guy I remember – humble, funny, and artistic in all things he did.

When word got to Colorado about Malay’s death, there was a seemingly blanketed look of shock on everyone’s faces. People didn’t know what to do with the news of a 23-year-old kid dying tragically while doing what he loved the most. Wookie remembers that after Malay passed away the snow melted off Beaver Creek mountain in a matter of weeks. That story still gives me the chills. In October, Wookie and I traveled to Barcelona, Spain – a place we had never been before – and of course Malay was on our minds. He was also on Wookie’s clothes as he wore several of Malay’s shirts while we were there.

There is no doubt that Malay changed the game of snowboarding. I saw it firsthand at the Honda Session in January 2004 which took place about six weeks before he passed away. It was a freezing cold night in Vail and Malay was competing against some of the best riders in the world including Shaun White, JJ Thomas, Chad Otterstrom, and Todd Richards, among others. Wookie recalls everyone thinking that Malay won after the trick he pulled. But because the competition was based on the number of tricks each rider did (and their level of creativity and difficulty) rather than being based on the rider’s biggest and baddest trick, the prize went to White.

Every year (that’s not a Leap Year), Malay is honored on either February 28 or March 1 by Beaver Creek locals and friends who get together and ride for their fallen friend. They will do so again tomorrow afternoon starting at the bottom of chair six. During the summer they skateboard at the Edwards skate park that is named for Malay. I have a JM sticker on my snowboard. It really doesn’t matter what day the calendar reads – Malay is everywhere and always will be.