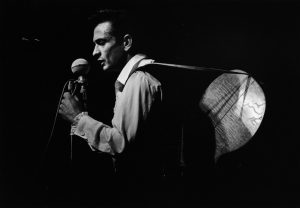 Today marks the 13th anniversary of Johnny Cash’s death so I thought about him and his music all day. I’m a Johnny Cash fan because my dad is a Johnny Cash fan but, regardless of listening to him as a child, his music always resonated with me and today I was wondering why. Maybe it’s because he is one of the best storytellers in music history. Or maybe it’s his unparalleled baritone voice that allows him to covey his pain better than most artists.

He started with his three-piece band, the Tennessee Three, then came up with Elvis Presley and Jerry Lee Lewis singing gospel and rockabilly, and then found his outlaw spirit animals and formed The Highway Men with fellow legends Krist Kristofferson, Willie Nelson, and Waylon Jennings. He was an American singer, songwriter, musician, and raconteur who told his tales in a way that demanded people’s attention. Cash defined authenticity and I think people appreciated his idiosyncrasies, for example the way he held his guitar like a rifle, usually started shows by saying “Hello I’m Johnny Cash,” and the fact that he always wore black. All of it just contributed to his legendary status.

Even though he never served hard time, people always thought of him as a musician/outlaw and I don’t think it’s just because he sang about going to prison. Maybe it’s because he played and recorded albums at Folsom Prison and San Quentin or maybe it’s because he was so badass that fans just assumed he had done something at some point to get himself thrown in jail. I’m not one to glorify mug shots, serious drug problems, or alcoholic tendencies, but Cash, similar to a lot of musicians, most likely got some of his best songs from writing about his demons.

Having sold 90 million records worldwide, he’s considered one of the most influential musicians of the 20th century and one of the best-selling artists of all time. Another reason he’s so widely renowned is the fact that he spans so many genres – a credential that earned him several inductions in the Country Music, Rock and Roll, and Gospel Music Halls of Fame.

Another huge influence on Cash was his eventual wife June Carter who, because she grew up singing with her family, had her own career way before meeting Cash. In fact, Cash listened to her songs for years before ever laying eyes on her. When they met they were both married to other people but Cash chased her down and they finally married each other in 1968. Before that, in the early 1960s, Carter wrote the song “Ring of Fire” which of course became a huge hit for Cash, and together they sang many duets including “Jackson” and “Long-Legged Guitar Pickin’ Man.” Johnny and June were a force – working together through Cash’s issues, dealing with combining families, and creating extraordinary music.

In addition to his original material, Cash has done some exceptional (and surprising) cover songs. One of my favorites is his version of Tom Petty’s “Won’t Back Down” which was recorded in 2000 with Petty on the backing harmony. After Cash recorded the song, Petty famously said: “[It] almost made me wish I’d never sung it…it was so good. He sang it with such an authority it was kind of like it was written for him.”

In honor of music’s hero in black, I’ll be playing my favorite Cash covered songs on the radio this week including tunes by Sting, Depeche Mode, Soundgarden, Bruce Springsteen, Sheryl Crow, and the Rolling Stones. While the originals are incredible, Cash’s versions are so genuine you might forget that they were written by someone else.

“I Walk The Line”

“God’s Gonna Cut You Down”