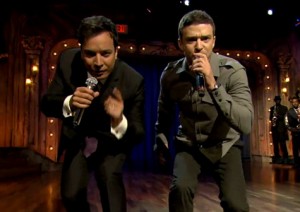 It doesn’t get any funnier than Jimmy Fallon and Justin Timberlake. It just doesn’t. When I think of comedic duos I think of Chris Farley and David Spade, Cheech and Chong, Bert and Ernie, Jay and Silent Bob, etc. But as funny as those guys are they might as well be performing at amateur hour compared to Fallon and Timberlake.

Why are Jimmy and Justin so funny? Well first of all they integrate music into their skits which of course I love but they also look like they are having the greatest time in the world every time they perform.

The most recent gem in the Fallon/Timberlake catalog is “Hashtag” which parodies our social media world that has resulted in the extreme overuse of the term hashtag. It is perfection. In fact it’s so good that in only two days the skit has already garnered an astonishing 7,417,728 views on YouTube.

“Hashtag” is only two minutes long but the actors nail it as they stream-of-consciousness their way through a Ray Romano impression, a Cookie Monster impression, break into song and more, all while talking at warp speed. And (spoiler alert!) Quest-Love calls both of them out at the end. Brilliant!

A few more of my Jimmy and Justin favorites:

“The Barry Gibb Talk Show” – Hosted by Barry Gibb (Fallon) and brother Robin (Timberlake) the 2003 Saturday Night Live skit features the actors singing and dancing, wearing crazy white seventies outfits with huge collars, talking through those crazy prosthetic teeth and basically trying not to double over in laughter along with the audience.

“The History of Rap” – Timberlake was just supposed to be a guest on Fallon’s late night talk show until the two of them jumped out of their seats and went through at 10-minute medley of popular songs from the likes of Grandmaster Flash, Salt N Pepa, Biz Markie, Nelly and many more. The original skit – which debuted in 2010 – was so good that it spawned three more History of Rap sketches. And, with The Roots playing background, each one is even better than the last.

“Summer Camp” – Taking place in “1983,” the skit features a braces-clad Timberlake and Fallon as teenagers at summer camp. The two of them randomly break into song and with their curly wigs and matching yellow shirts it’s impossible not to laugh with them.

What will Fallon and Timberlake do next? Only they know for sure but I’m pretty certain that whatever they come up with will be another comedic classic.