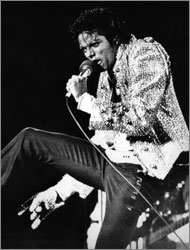 The last few days have prompted me to ask an age-old question: Are musicians worth more after they die? Arguably the greatest guitarist of all time, Jimi Hendrix died on September 18, 1970 at the age of 27. The circumstances of his death are a little shaky but most believe that he died as a result of taking too many sleeping pills.

Hendirx was inducted into the Rock and Roll Hall of Fame in 1992 and Rolling Stone named him the top guitarist on its list of the 100 greatest guitarists of all-time in 2003. There is no question that Hendrix made his mark on music history with songs like “Purple Haze,” “Hey Joe,” “The Wind Cries Mary” and one of my favorites “Foxey Lady.” In addition, who can forget when he set his guitar on fire at the 1967 Monterey Pop Festival in San Francisco? Even if you weren’t there you’ve seen the footage. It’s an iconic image for sure. Pop culture has also immortalized him from Dana Carvey’s unforgettable interpretive dance in Wayne’s World to Woody Harrelson and Wesley Snipes arguing about who can hear Jimi in White Men Can’t Jump.

Recently, Hendrix pulled a Tupac/Biggie and released a new record 40 years after his death called Valleys Of Neptune. The title song is classic Jimi- raw guitar accompanied by his strong but melodic voice. He’s never sounded so good. And who can resist lyrics like this:

I see visions of sleeping peaks
erupting …
releasing all hell that
will shake the Earth from end to end —
And this ain’t bad news, good news,
or any news … it’s just the truth,
Better save your souls while
you can —

I also love “Ships Passing Through the Night.” I never thought I’d hear new Jimi Hendrix material in my lifetime but this stuff is really, really great. It actually gives me chills.

The album also includes an instrumental cover of Cream’s “Sunshine of your Love” along with some of his older songs such as “Fire” and “Stone Free” but most of the disc is new material. Shocking and awesome at the same time since Hendrix is one of my top five favorite artists of all time.

In other posthumous news, eight months after his June 25, 2009 death (at age 50) from “acute propofol intoxication,” Michael Jackson is making headlines again but this time it’s for a record deal. But not just any a record deal, a $250 million recording contract that Sony and Jackson’s estate say is the most lucrative recording contract in music industry history. With 10 albums over seven years, the deal will involve a mix of previously unreleased songs and new packages of familiar ones. New songs? Really? The guy has been dead since 2009!

Since MJ’s death, Sony has sold an estimated 31 million of his albums globally which is no surprise considering how many fans he has and how many people were affected by his death. For weeks MTV paid tribute to MJ by playing his videos and every media outlet across America was talking about the singer. This Is It grossed $34.4 million in its first five days of release and has become the world’s highest-grossing concert film of all time. By the first anniversary of MJ’s death, his estate expects to have earned $250 million from sales of music, merchandise and tickets to This Is It.

Both Jimi and MJ are on a roll and it’s just too bad that they are not here to enjoy it. Although they were very different musicians with very different styles people were drawn to them. There are kids all over the world who pick up the guitar and try to emulate Jimi while those same kids could be putting on a sequined glove and trying to dance like the King of Pop. We could argue all day about whether death makes musicians more valuable but the fact is that while they were around they struck a chord and it was so loud that many generations are still feeling it and will continue to feel it. Can you hear Jimi and MJ? I definitely can.