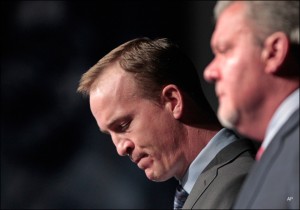 After hearing that Peyton Manning has officially been released from the Indianapolis Colts it got me thinking about one of my favorite movies of all time – Jerry Maguire. As most people know, the film is about a sports agent whose life completed changes when he realizes he no longer wants to be a shark in a suit.

Jerry Maguire: Twenty-four hours ago, man, I was hot! Now…I’m a cautionary tale. You see this jacket I’m wearing, you like it? Because I don’t really need it. Because I’m cloaked in failure! I lost the number one draft picked the night before the draft! Why? Let’s recap: Because a hockey player’s kid made me feel like a superficial jerk. I ate two slices of bad pizza, went to bed and grew a conscience!

Another overarching theme in the movie is loyalty – who is loyal, who isn’t and what that means professionally and personally.

Avery Bishop: There is no real loyalty, and the first person who taught me that Jerry Maguire was you.

So it turns out Maguire was right. There is no loyalty. Because if there was, Colts owner Jim Irsay would not have allowed one of the best quarterbacks in history become a free agent. Irsay says that the decision wasn’t about money but who is he kidding? Every decision is about money especially when the Colts saved $28 million by letting Manning go.

But the question is how much is this little stunt really going to cost the Colts? Here are a few stats that might answer that question:

-From 1998 to 2010, Manning led the Colts to seven AFC South division championships, two AFC championships and to a Super Bowl championship.
-He has won a record four league most valuable player awards, was the most valuable player of Super Bowl XLI, has been named to eleven Pro Bowls, has eleven 4,000-yard passing seasons (including a record six straight) and is the Indianapolis Colts’ all-time leader in passing yards (54,828) and touchdown passes (399).
-In 2009, he was named the best player in the NFL and Fox Sports along with Sports Illustrated named him the NFL player of the decade of the 2000s.
-Until Manning underwent two neck surgeries he had never missed an NFL game in his career.

And that’s only scratching the surface. So what the hell were the Colts thinking?

I know he’s 35-years-old and I know he’s coming off of major surgery and a missed season but this is Peyton Manning we’re talking about! He is a future NFL Hall of Famer for sure and they just treated him like he was yesterday’s news. I can’t wait to see another team (The Broncos! The Dolphins!) pick him up so he can lead them to the best season ever.

If history is any indication Manning is going to spend every waking moment getting strong so he can come out with guns blazing next season. I hope he shows the Colts organization, Irsay and the rest of the Indianapolis idiots what a huge mistake they made.