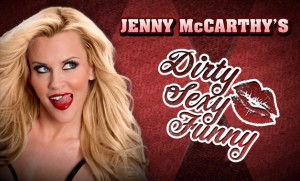 Last night we had tickets to what we thought was going to be a Jenny McCarthy stand-up show. We were wrong. When McCarthy came out to welcome the audience I thought to myself, “That’s cool – even though she probably has an opening act she is saying hi to us rather than making everyone wait until the end to actually see her.” She then told us that she found four of the funniest, dirtiest and sexiest women to join her on her comedic tour. I was confused. Four openers?! How long were we going to be here? Turns out the entire show consisted of those four women and we would get zero stand-up from McCarthy. Zero.

Although the four comedians were funny and raunchy they were not who I was there to see. I bought the tickets thinking that we’d see the hilarious Jenny McCarthy talking about her husband Donnie Wahlberg (love them together), what it’s like to be on The View, her stint as an MTV VJ and maybe even getting her start on the dating show Singled Out! Remember that one 90s kids?! But that’s not what happened. Instead, out of the two hours we spent at the Vilar Performing Arts Center, we only saw McCarthy for 10 minutes and those 10 minutes were not consecutive. She was the host, not a performer, which meant she welcomed the audience, introduced each comedian, showed us a clip of Wahlberg dressed as different types of guys she went on dates with before meeting her husband and then she said goodbye and thanked us for supporting female comedy. That’s not nearly enough time spent on stage for someone who is supposed to be headlining.

In the publishing business we call that false advertising – telling the customer they are getting one thing and then giving them something else. Not cool and extremely disappointing. McCarthy is charismatic, well-spoken, engaging, wears fierce shoes and is as pretty as she looks on television. So why doesn’t she want to perform? Each comedian did about 20 minutes – McCarthy could have handled that! Instead she is using her name to get people in the door and then providing other comedians rather than herself. Maybe she’s getting older and doesn’t feel like getting on stage anymore or maybe she feels like she did her showbiz time and it’s someone else’s turn. But that’s still no excuse. While I appreciate her helping out fellow female comedians, people want to see her show too. I know I definitely did.