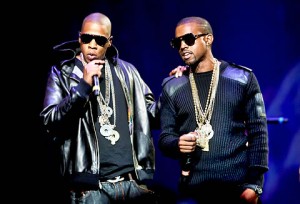 Who is more popular and well-liked in the hip hop world than Jay-Z?  Probably no one.  Who is both hated and loved but is definitely not ignored?  Kanye West.  And these two have made an album together that is so fueled by star power and talent that the earth might explode.

I thought that when Jay-Z married Beyonce the music world had reached the pinnacle of two heavy hitters combining into one.  I was wrong.  Although Jay-Z and Beyonce are equally colossal in terms of stardom and likability, they have only made a few songs together- not an entire album.  And while Kanye is an enormous asshole that is known as much for his music as he is for shooting his mouth off, (even though I hate to say it) there is no denying his talent.

So in exactly 10 days Jay-Z and Kanye’s collaborative studio album, Watch the Throne, will officially be released.  I’m thinking that after it hits the streets on August 1st we may see it break Outkast’s record for best selling hip hop album of all time – their 2003 double album Speakerboxxx/The Love Below went platinum 11 times.

Originally intended as a five-track EP, Watch the Throne was revealed by Kanye to be a full-length album in an October 2010 interview for MTV.   He said in the interview that they planned to record in the South of France.  Production for the album began in November in Bath, England and continued during available times in Jay-Z’s and Kanye’s respective schedules at recording locations in Australia, Paris, New York City and Los Angeles.  In an interview for Billboard, Jay-Z said that they often recorded in hotel rooms including the Mercer Hotel and Tribeca Grand Hotel in New York City.

In an interview for Rolling Stone, Jay-Z discussed their insistence on recording in person and attributed it to the delay in releasing the album stating, “If we were gonna do it, we were gonna do it together. No mailing it in.”  The album features guest appearances by recording artists Beyoncé, Frank Ocean and Mr Hudson.

On July 20 the song “Otis” premiered on well-known NYC radio station Hot 97 and was subsequently leaked to the public.  If this song is any indication of the rest of the album Watch the Throne is going to be huge.

1. “No Church in the Wild” (featuring Frank Ocean)