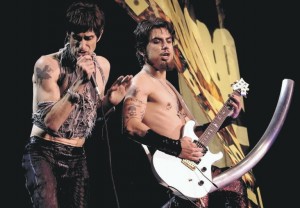 On May 29 I bought a last minute ticket to see Jane’s Addiction – a band that I’ve always been a fan of but had never seen live. I couldn’t believe that the show wasn’t sold out but I’m glad it wasn’t because Perry Farrell and Dave Navarro know how to put on a rock and roll show.

While Jane’s Addiction has featured a revolving door of members over the years, the music has stayed pretty solid. Hailing from Los Angeles, Jane’s Addiction formed in 1985 and its original lineup consisted of Perry Farrell (vocals), Dave Navarro (guitar), Eric Avery (bass) and Stephen Perkins (drums). After breaking up in 1991, Jane’s Addiction briefly reunited in 1997 and again in 2001, both times with Avery declining to participate. In 2008, the band went on tour and Avery joined them but subsequently left the band in early 2010 as the group began to work on new material.

Their initial farewell tour launched the first Lollapalooza festival – arguably one of the most popular music festivals in the country and the festival that paved the way for the Bonnaroos and Coachellas of the world.

What’s interesting about Jane’s Addiction is that they are hard to categorize – something I realized after seeing them live. Although I knew more songs than I thought I would, most of the songs I grew up listening to were of the pop/rock persuasion like “Been Caught Stealing” and their most famous song “Jane Says.” But what I learned from their live show is that there is a lot of big guitar and punk rock influence.

Perry Ferrell (whose name plays off the word “peripheral” – another factoid I learned at the show) is a force on stage. His voice is bigger than expected and he is all over the place – so much so that he kind of reminds me of Flea of the Red Hot Chili Peppers.

That being said, musically speaking, Dave Navarro is the real story here. In addition to playing on all the Jane’s Addiction albums and three RHCP albums he’s played guitar on some very cool (and sometimes surprising) songs:

With Nine Inch Nails:
1995 Further Down The Spiral – guitar on “Piggy (Nothing Can Stop Me Now)”

With Tommy Lee
2005 Tommyland: The Ride – guitar solo on “Tired”

Clearly Navarro is the Richards to Farrell’s Jagger – a connection that was visibly demonstrated when they played at the Fillmore that night. I’m glad I got to see a so-called 90s band dig deep and play a better show than I was expecting. I’m also glad that Navarro is still out there killing it because he was definitely one of the more talented guitarists I’ve seen in awhile.

P.S. For the Jane’s Addiction fans out there – the set list: