Although basketball is my favorite sport to play and watch there is something alluring about baseball season in America.  I grew up 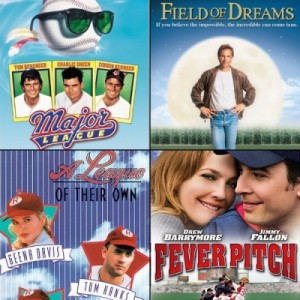 playing with my Dad, my cousin and then on softball teams – which was during a time when baseball movies were all over the place.  And I couldn’t get enough of them.

Between 1988 and 1994 baseball movies ruled the theatres and my childhood memories:

Other classics released more recently include:

This weekend I will be going to my first Rockies game of the season so to get myself geared up I present a list of my favorite baseball movies of all time (in order by year) and why there are so damn good:

Bull Durham – Featuring heavy hitters (pun intended) like Kevin “Mr. Baseball” Costner, Susan Sarandon and Tim Robbins, this movie about how a minor league baseball team evokes one hell of a love triangle is so much fun to watch.  Costner and Robbins, who play the catcher and up-and-coming pitcher, are so young and talented you can see why they are now household names.  Meanwhile, Sarandon is a force to be reckoned with– and she hasn’t aged a day since.

Major League – This one was all about Winning!  Way before Charlie Sheen went off the deep end he was hilarious as diagonal haircut-sporting, 100 mph pitch-throwing, skull glasses- wearing Ricky “The Wild Thing” Vaughan.  And Tom Berenger wasn’t so bad to look at either.

Field of Dreams – Everyone knows this is THE baseball movie.  The “Stairway to Heaven” and “Free Bird” of baseball movies.  I don’t even have to go into why this movie carries so much magic – you just have to watch it.  If you haven’t seen it – step away from the blog and buy it, rent it, Neflix it or steal it.  Now.

The Babe – John Goodman perfectly depicts Babe Ruth becoming a legend and everything that comes with it.  Starting with his father abandoning him at an orphanage to realizing his ability to hit homeruns to his bad drinking habits – this movie is all heart.

A League of Their Own – Apparently casting big names in baseball movies is a good way to go as this one brings together Tom Hanks, Madonna, Geena Davis, Rosie O’Donnell, John Lovitz, Gary Marshall and Bill Pullman.  This movie is the epitome of my childhood as I was playing softball at the time and was on an incredible team.  With so many quotable lines (“There’s no crying in baseball!”) and a story with such a huge historical relevance, this movie (again with the puns) smashes it out of the park.

The Sandlot – “You’re killing me smalls!”  How many times have we heard people say that?  A coming-of-age movie about a kid who moves into a new neighborhood and finds friends through baseball shows how the sport has brought so many different kinds of people together for so many decades.

For Love of the Game – Costner does it again – this time as an aging pitcher who flashbacks his life and career while pitching the perfect game.  Exuding both humility and sincerity, Costner (with the help of Kelly Preston) shows the other side of being a professional baseball player who is forced to see the light at the end of his career.

Thanks for the memories and see ya at Coors Field on Saturday!