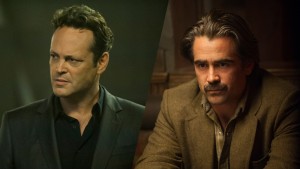 If you were a fan of the first season of True Detective then you’re probably as excited as I am about the second season. Fans of the show have been waiting for over a year since Matthew McConaughey and Woody Harrelson completed their flat circle of time in March 2014. Now it’s time to shift gears from Louisiana to Los Angeles and follow new characters as they prowl around the city of angels. Audiences will be treated to Vince Vaughn playing the bad guy and Colin Farrell will play a detective – both roles were announced last fall. But the surprise is Rachel McAdams! Until the release of the trailer yesterday I had no idea one of my favorite actresses was going to be part of a very intense, edgy and well-written show.

Here is the link: https://www.youtube.com/watch?v=Q4uxGbhO4ag

Although it’s only a minute long, the trailer is hardcore enough to get everyone who has been looking forward to season two counting down to June:

-Vaughn has the lead quote which is: “Sometimes your worst self is your best self” (whatever that means) and looks California gangster in a suit and aviator sunglasses.

-Worn down and grey, Farrell appears much older than his actual 38 years. A clip shows him with a frightening look on his face and severe bloody knuckles as a voiceover says, “My strong suspicion is we got the world we deserve.”

-McAdams seems to be going method – she’s a hardcore cop with anger in her eyes, hardly any makeup on her face and either a gun or knife in hand in every scene. Her voiceover heatedly talks about how a girl has disappeared and no one cares.

Clearly we will be dealing with three very conflicted and lethal characters – which is exactly what True Detective fans have learned to expect. Just like last seasons, show creator Nic Pizzolatto wrote all eight episodes of the second season, and although the setting and characters have changed, the trailer indicates that the intensity and ferocity of the show have not.