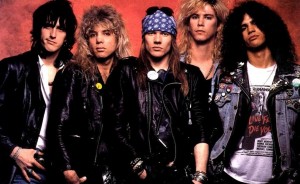 Although everyone knows that rumors are called rumors for a reason, I just read that Guns N’ Roses are announcing a world reunion tour within the next few days and I’m already excited about it. Coinciding with the band’s 30th anniversary, the tour announcement would confirm that Axl Rose and Slash have gotten over themselves and decided to take the stage together in 2016.

Hold on – has it really been three decades since Guns N’ Roses ravaged the Sunset Strip?  Yes. They were signed by Geffen Records in 1986 and subsequently released six studio albums and sold more than 100 million records worldwide, which makes them one of the world’s best-selling bands of all time. Additionally, they were inducted into the Rock and Roll Hall of Fame in 2012 which was their first year of eligibility.

Unfortunately their legendary feuds turned them into the band that notoriously paved the way for every Behind the Music episode ever recorded when they let drugs, alcohol and their egos ruin one of the most exciting rock and roll ensembles in history. In fact, the last time Slash, Axl, Duff McKagan, Izzy Stradlin and Matt Sorum performed together was on their “Use Your Illusion” tour which finished in the summer of 1993.

Over the last 10 years, I’ve been lucky enough to see Slash (as part of the Scott Weiland-fronted band Velvet Revolver that also included McKagan and Sorum) and Axl (fronting the 2011 version of Guns N’ Roses that featured Dizzy Reed and a few other talented musicians no one knows) but never the whole band together. So the next few days should be interesting – will this actually happen? Stranger reunions have taken place. I saw the original Van Halen lineup perform in 2008 and in 2012 I saw Motley Crue and Kiss so apparently crazier things than Slash and Axl acting like adults have happened. Of course if this tour actually transpires – and if it does I can’t wait to hear the name of it – the band will be laughing all the way to the bank because experts say that they could take home approximately $100 million.

Hopefully it’s not all about the money and these guys actually want to leave the turmoil behind and put on a show. Never in a million years did I think I’d be writing about Guns N’ Roses performing again but evidently, as their “Dust N Bones” lyric says, “time moves on.”