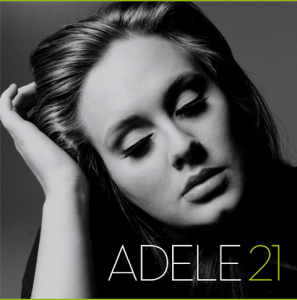 You know it’s a good song when you’ve heard in on the radio, the iPod and in every store you walk into and you’re still tapping your feet.  Such is the case for Adele’s smash hit “Rolling In the Deep” and subsequently her latest hit “Someone Like You.”

The fact that these two songs are part of an album that was released EIGHT months ago and are still ruling the charts is staggering.  21 is the second studio album by British singer-songwriter Adele.  Released January 21, 2011 in the UK and on February 22, 2011 in North America, the album was named after the age of the singer at the time of its production.

Although music is no stranger to records about breakups, 21 has something different.  The foot-stomping beat that leads into “Rolling in the Deep” give me goose bumps every single time and clearly Adele has a voice to be reckoned with.  As far as I’m concerned, 21 is in the realm of Alanis Morissette’s breakup album Jagged Little Pill because it gives a huge voice to some of the most powerful human emotions: anger, revenge, heartbreak, self-examination and forgiveness.

Jagged Little Pill spent 12 non-consecutive weeks at number one on the U.S. Billboard 200 albums chart.   It was ranked by the Billboard 200 as the number one selling album of the 1990s and by 2009 the album had sold 33 million units worldwide. Morissette earned five Grammy wins out of nine nominations from the album.  In October 2002, Rolling Stone ranked it number 31 on its Women In Rock – The 50 Essential Albums list and in 2003 the magazine ranked it number 327 on its list of The 500 Greatest Albums of All Time.  The album also holds a title in The Definitive 200 Albums list, in which it is placed at number 26.

Back to 2011 and Adele: 21 debuted atop the UK Albums Chart with first-week sales of 208,000 copies and peaked at number one in over nineteen countries.  In the U.S., the album debuted at number one on the Billboard 200 chart, selling 352,000 copies in its first week.  Following a highly praised performance of “Someone Like You” at the 2011 BRIT Awards, the album maintained its number one position in the UK for 11 consecutive weeks, and as of July 2011, amassed 18 total weeks at number one.

In the US, 21 has topped the Billboard 200 for 12 non-consecutive weeks (the same number as Jagged Little Pill) and has moved 3.5 million copies so far.

Additionally, 21 set the Guinness World Records for the most consecutive weeks at number one (eleven), as well as the most total weeks at number one (eighteen) on the UK Albums Chart for an album by a female artist.  Ranked as the best-selling album of the year so far in both the UK and the U.S., 21 also became the all-time best selling digital album in both territories.  As of this month, global sales for the album are estimated at 10 million copies.