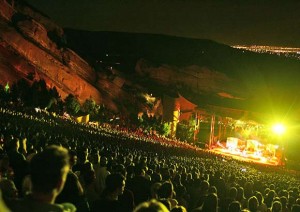 There are a few outdoor music venues in the United States that have gained recognition for being not just a venue but a destination.  There’s the Gorge Amphitheatre in Washington, Alpine Valley Music Theatre in Wisconsin and of course, Red Rocks Amphitheatre right here in Colorado.  While the other two are music destinations that people are always excited to visit to see their favorite band, Red Rocks is an iconic venue that has hosted some of the greatest musicians in history.  If only those rocks could talk.

Last month marked the 100th anniversary of touring acts playing live concerts at Red Rocks.  Legendary opera singer Mary Garden sang there in 1911 and famously claimed, “Never in any opera house the world over have I found more perfect acoustic properties.  I predict that someday, 20,000 people will assemble there to listen to the world’s greatest masterpieces.”

What’s amazing about Red Rocks is that if you go to a show the venue provides a three-prong experience.  First, you get to enjoy (or agonize over) a nice hike up those steps.  There are some people who go there for an outdoors workout to run the steps and then check out the beautiful view at the top.  Those who are attending a concert may or may not like the hike but everyone likes the view once they get to the top.  It’s amazing to look out at all that natural beauty and then, almost as a bonus, you get to see one of your favorite musicians perform.  And if you’ve ever seen a show at Red Rocks you know that artists bring out the big guns.  It’s like there is something in the air – or the rocks – that reminds musicians why they love music and why they started playing in the first place.  Seriously – all hippie bullshit aside Red Rocks speaks to people who are there whether you are performing, attending a show or just hanging out.

As far as the history of the venue goes – the City and County of Denver purchased it in 1941 for $50,000.  Since then Red Rocks has done a lot for Denver; last year alone it contributed $1.85 million in tax revenue.  The venue has held regular concert seasons every year since 1947 and can house 9,450 fans at a time.

Over the years many bands have filmed and recorded concerts at Red Rocks including U2’s legendary Under a Blood Red Sky in 1983 and Dave Matthews Band’s popular album Live at Red Rocks 8.15.95.  Widespread Panic, the Grateful Dead, Willie Nelson and Big Head Todd and the Monsters have played the most shows at Red Rocks.

After concert industry magazine Pollstar awarded Red Rocks the honor of the best small outdoor venue for the 11th time, they decided to name the nationally coveted honor the Red Rocks Award and removed the venue from the running.

On a personal note, some of the best shows I’ve ever seen have taken place at Red Rocks.  The day I moved to Colorado nine years ago I saw Tom Petty and Jackson Browne with my good friend J.P. Crum.  It was quite a welcome to my new home.  Since then I’ve also seen the Beastie Boys, the Foo Fighters, Journey, the Allman Brothers, Def Leppard and Ben Harper, just to name a few.  This summer I hope to see a few more good ones – possibly Soundgarden, Kenny Chesney and Kings of Leon but either way I will visit Red Rocks at some point this summer.  You can’t beat that view on a blue sky summer day in Colorado.