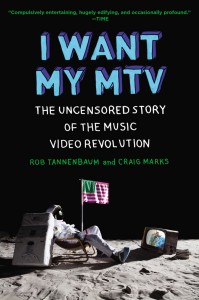 I miss MTV. And by that I clearly mean that I miss the original MTV that actually played videos instead of Jersey Shoe reruns. Over the years I watched countless videos with friends and then talked about them at school or at parties. Sometimes watching the videos turned into me buying tapes and CDs and other times I wondered which I liked better – the song or the video.

While reading this book, I learned a lot about the channel I grew up watching as all 526 pages gave an account from a wide range of perspectives about how MTV got started, how it succeeded, how it was saved and what it is today. Singers, VJs, executives, drummers, music video producers, comedians, managers and models, among many others, were quoted in this book to help tell the story of the channel that changed the music business.

During a time when Facebook did not exist (i.e. 1981 to 1992) MTV was the social network for people who watched. Instead of “Did you see that post?” it was “Did you see that new video?” and if you hadn’t seen it you were completely out of the loop.

Not only did the book explain why MTV was revolutionary during its heyday but it also explained how it functioned as a platform for artists to put a face, attitude and lifestyle to their music and gave viewers across the country exposure to musicians, celebrities, politicians and other personalities they otherwise would not have had.

“MTV was an outlet for a product that barely existed.”

“The channel was plotted to captivate an audience whose interests had been ignored: John Lack, who started MTV, recognized that teenagers were ‘the demographic group least interested in TV,’ because TV wasn’t interested in teens.”

“MTV gave teens what they wanted, and got them not only interested in, but obsessed by MTV, making it their clubhouse.”

“The channel gave a platform to new acts, asking only that they be beautiful or outrageous.”

“Before Xbox and Facebook, the Disney Channel and text-messaging, kids did one thing, separately but simultaneously: They watched MTV.”

Although MTV started with The Buggles, Pat Bentar, Duran Duran and Rod Stewart and then shifted to metal i.e. Motley Crue, Great White and Skid Row, music video stars Michael Jackson and Madonna are credited with catapulting MTV into the big-time. In addition to boosting musicians, MTV was the starting off point for some of the biggest names in Hollywood including actors, comedians and directors.

“Yo! MTV Raps gave hip-hop its first international forum and accelerated the music’s popularity around the world.”

“MTV gave work to young directors, producers and executives who became power brokers in film and TV, most notably David Fincher (The Curious Case of Benjamin Button and The Social Network) and Michael Bay (Armageddon and Transformers).”

Throughout the book, some people said that MTV helped the music industry and the artists within it while others thought it was the worst thing to ever happen to music. Either way if an act wasn’t making music videos between 1981 and 1992, they were missing out.

“Videos made songs better, not worse. They enhanced the joy of being a music fan, rather than diminishing it.”

“1992 marked the end of MTV’s Golden Era…it was also the year MTV debuted The Real World.”

The comparison of MTV to technology is interesting because the channel allowed rock stars to invade the homes of people all over the country and then the world. Pretty soon everyone not only know the name of the band and the song they were singing, they also knew what clothes the artists wore, what they liked to drink and how they spent their time.

“MTV signified a transition from an era when the biggest rock stars were bands that transformed public consciousness, to one where technology filled that role. Today that transformation is complete: Apple sold 275 million iPods in the first nine years they were on the market, which is higher that the number of records sold by Elton John, Aerosmith, AC/DC, Pink Floyd or U2 in their careers.”

“Michael Jackson’s Thriller videos transformed the network from a curiosity into a fulcrum.”

“MTV influenced editing – now, we were cutting picture to music.”

“This is the story of how an asinine idea changed the culture of America, and then the world, for better or worse.”

MTV most definitely changed the culture of the world and changed everyone’s perspective on music. Attaching videos to music made it so records could be seen. It gave fans a way to connect with their favorite artists in a whole different way and completely turned the music business upside down. I can’t image what the music business would be today without MTV – I just wish the current generation had the opportunity to experience it.