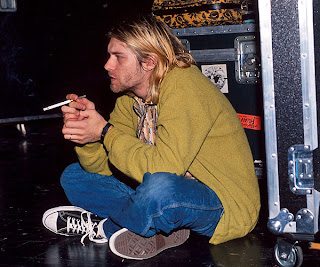 While our parents vividly remember the day John Lennon was shot, if you’re a music fan and you’re at least 25 years old the date April 8, 1994 probably resonates with you a lot more. If that date doesn’t ring a bell then let me remind you that it was the day music died for our generation. Kurt Cobain killed himself in Seattle that day and we lost one of music’s greatest talents who not only started an entire new music category (grunge) but also defied the rules in every way imaginable. Whether it was wearing a t-shirt that said “Corporate Magazines Still Suck” on Nirvana’s first cover of Rolling Stone or dying his hair with Kool-Aid for their first SPIN cover, Cobain was someone who probably had no idea how good he really was.

Fortunately, the rest of us did.

As the band’s most successful album, Nevermind took the music world by storm. Its first single “Smells Like Teen Spirit” quickly gained momentum thanks in part to significant airplay of the music video on MTV. By Christmas 1991, Nevermind was selling 400,000 copies a week in the United States. In January 1992, the album ousted Michael Jackson’s Dangerous from number one on the Billboard charts and also topped the charts in numerous other countries worldwide. The month Nevermind reached number one, Billboard proclaimed, “Nirvana is that rare band that has everything: critical acclaim, industry respect, pop radio appeal, and a rock-solid college/alternative base.”

While we will never know the level of impact Kurt Cobain and Nirvana could have had if Cobain was still alive, their mark on music is unquestionable. Songs like “Smells Like Teen Spirit,” “Lithium” and “In Bloom” hold up so well all these years later and I don’t think that will be changing anytime soon.

In the meantime, The Experience Music Project in Seattle has decided to honor Nirvana in the biggest and best way possible. The exhibit will be the home to the largest and most complete exhibit ever dedicated to Nirvana and the grunge scene when “Nirvana: Taking Punk to the Masses” opens at the EMP on April 16th, 2011. The exhibit, which EMP began gathering material for 15 years ago, will house over 200 Nirvana artifacts and countless never-before-seen photographs of Kurt Cobain, Krist Novoselic and Dave Grohl provided by those who were a part of the Nirvana legend.

The fact that Nirvana songs are now on both rock radio stations and classic rock stations is a shame in the sense that they are classic because the band no longer exists. In a perfect 2010 world Nirvana would be headlining tours with Pearl Jam and Cobain and Vedder would be singing together like Elton John and Billy Joel.

Although these days seeing an actual music video on MTV would be the equivalent of seeing a unicorn running around my apartment complex, I miss seeing Nirvana videos on MTV. Cobain is and will continue to be a music legend but I wish he was still around coming up with new songs, telling great stories and defying rock and roll.