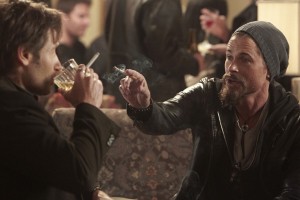 Centered around David Duchovny as writer/nutjob/addict/sex fiend Hank Moody, the show is about a guy everyone wants to either be or get into bed.  He is charming, intelligent, a great writer and also a huge pain in the ass.  He makes messes of everything wherever he goes, has no edit function, is very arrogant, has way too many vices, rejects social norms and can’t possibly figure out a way to get his personal life together.  Moody holds a torch for the woman he loves (who is also the mother of his child) but never married and would do anything for his daughter. That being said he is constantly going out of his way to destroy himself and his career and no one seems to be able to figure out why.

A few things going on in season four:

1) Moody is in trouble with the law for unknowingly having sex with a teenage girl.

2) Hollywood wants to make a movie out his book (which was stolen by said teenage girl) but they need him to get his act together and write the screenplay.

3) The famous actress slated to play the teenage girl can’t resist Moody causing even more issues since she is half his age.

4) As per usually Moody is trying to get his family back – even though they consider this latest screw up as the last straw.

One of my favorite parts of season four is Rob Lowe guest starring and playing 100 percent against type as insane actor Eddie Nero.  He is interested in playing Moody in the movie and might just pull it off considering his level of crazy.  Lowe speaks in this raspy voice and sports a beanie and a huge beard that looks to have some dreads in there somewhere. Nero is absolutely nuts to the point where his hijinks make Moody seem less off the wall:  He kisses Moody’s agent out of nowhere, pulls a gun at a tattoo parlor and, just like everyone else on this show, has zero edit function.  Lowe only appears in three episodes but wow did he make an impression – I can’t believe they were able to make him look like a homeless person but it worked.

A few of my favorite quotes from this season:

1) Eddie Nero: It’s about a guy trying to keep it together while falling apart.

2) Karen: If you are careless with something long enough it breaks.

3) Becca: Dad do we look like the kind of girls who are into American Idol?

Hank: No not so much, actually you like girls who would hurt girls who were into American Idol.

4) Hank Moody: You’re not gonna play me like that, are you?

Hank Moody: Like a cross between Bruce Springsteen and Mickey Rourke. In a gay bar.

Turn on Californication – you won’t be able to look away.