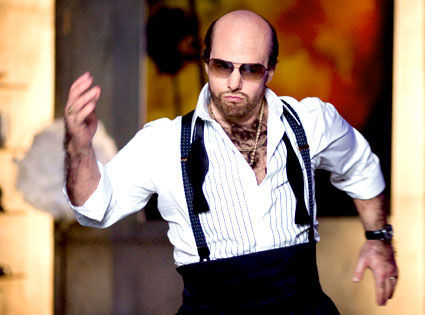 The MTV Movie Awards used to be a show that I looked forward to every year. I loved the good old days of Jim Carrey showing up looking and talking like Jim Morrison. I always got a kick out of MTV pairing up presenters who hated each other. It was also nice when the show was hosted by quality comedians like Chris Rock or Jimmy Fallon and when the ages of the people who were winning and presenting didn’t end in “teen.”

Sadly, I’m getting too old for MTV award shows but NO ONE was too old to watch the highlight of this year’s award show: Tom Cruise taking himself out of his comfort zone and out of his “Tom Cruise-ness” to play Les Grossman. It was comedic bliss. As a greedy, disgusting studio executive, Tom Cruise transformed himself into the funniest character I’ve seen in a LONG time. And then it got better: Tom Cruise shaking his money maker with Jennifer Lopez to a Ludacris song was priceless.

Ok, now for the rest of my comments in order of appearance:

–Twilight sucks, the cast sucks and they are possibly the most uncharismatic and awkwardly annoying trio in the history of movies. How does Kristen Stewart have a job? How is she popular? She can’t even accept an award without being awkward and obnoxious.
-“Best Scared As Sh*t Performance” is an award category? What??? I remember when “Best Kiss” was the provocative category.
-What was with the “live/previously recorded” nonsense always appearing onscreen? Who cares?
-Loved the basketball game style “Kiss Cam.”
-I want to hang out with Bradley Cooper.
-Someone please tell Russell Brand to stop talking.
-In her electric blue wig and spray tan, Katy Perry looked like Nutjob Barbie. Thank God Snoop Dogg was there to rescue the neon-colored atrocity that was her performance.
-I love that Betty White has suddenly become the go-to celeb guest.
-Sandra Bullock: All class all the time. Good to see that people of all ages realize it. And she called out Scarlett Johansson for being awkward…and….a….stage prop? And then they kissed. Weird.
-“Best WTF Moment” is a category? Wow….
-Loved watching Samuel L. Jackson bring back the Pulp Fiction biblical reference.
-If the audience wanted their WTF moment they got it when Mark Wahlberg and Will Ferrell were hanging from the ceiling complaining about why they were up there.
-What was that fringe outfit Shaun White had on? Please put a shirt on. Thanks.
-Christina Aguilera has such a huge voice; I just wish she found something else to sing about other than being a bionic woman. Also, the flashing heart on her crotch was a little much.
–Twilight won “Best Movie?” No!!! Those three remind me of the band that never wants to play the song that made them famous in the first place. They conduct themselves as if the audience is lucky to be in their presence. Make it stop!