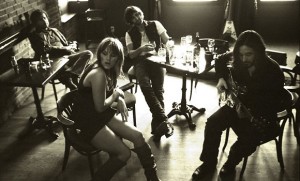 Have you seen the video for the Grace Potter & The Nocturnals song, “Paris”?  Shot in black and white with lead singer Potter and her band looking like something out of seventies rock and roll I couldn’t take my eyes off the screen.  While female singers aren’t always my first choice, Potter kills it.   In addition to looking like Heidi Klum and pulling off Tina Turner – type dresses she can hit AC/DC-esque high notes while playing several instruments including guitar and piano.  When the band played a live concert for the troops in Iraq she even duetted with the Heart girls and completely held her own.  It was unbelievable.

Now to be fair – and to not be one of those writers who pulls a No Doubt and only talks about the female lead singer –Potter has a sensational band behind her.  The Nocturnals include Scott Tournet on guitars and harmonica, drummer Matthew Burr, Catherine Popper on bass guitar and vocals and Benny Yurco on electric and vocals.  They too carry the seventies band persona and provide an incredible backdrop for Potter.

“You got me down on the floor
So what’d you bring me down here for?
If I was a man I’d make my move
If I was a blade I’d shave you smooth
If I was a judge I’d break the law…”

For those around the country who have a television the band will be on Letterman tonight. For all the Denver kids – this band is coming to the Ogden Theatre on Friday, February 11 so let’s get some tickets and go!  In the meantime, download “Paris,” “Apologies” and their cover of Jefferson Airplane’s “White Rabbit.”  You won’t be disappointed.