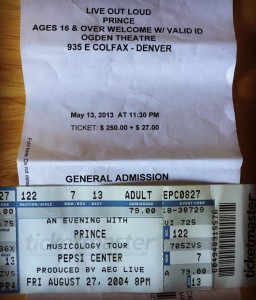 Today rock and roll lost one of the most innovative performers and most talented guitarists in the history of music as Prince Rogers Nelson was found unresponsive at Paisley Park Studios in Chanhassen, Minnesota. He was 57 years old. While Prince’s death is a huge shock, the announcement comes on the heels of an incident that occurred earlier this month when his plane made an emergency landing following a performance in Atlanta. He was rushed to the hospital to address flu-like symptoms including dehydration but was released a few hours later.

While there is no question that Prince left an incredible catalog behind, 57 is really young to lose a legend of his caliber. Like Michael Jackson, who also only made it (barely) to his fifth decade, Prince is more than a musician. He is someone who taught us to push boundaries with words, fashion, and career choices, as he redefinied music genres over and over again. Prince did everything his own way. Regardless of what people thought about the way he dressed, what he said, the fact that he changed his name to a symbol, his sexuality, etc., his life and career was dictated by no one other than him. And we are all better for it. By combining rock, soul, funk, pop, and R&B, among other genres, he showed the world that music could be as colorful as it was hardcore.

Prince by the numbers:

-Prince sold over 100 million records worldwide, making him one of the best-selling artists of all time.

-He won seven Grammys and was nominated 30 times.

-He was inducted into the Rock and Roll Hall of Fame in 2004, his first year of eligibility.

Prince got his start in the record business at age 19 when he released his debut album For You in 1978. His sophomore album Prince (1979) went platinum followed by Dirty Mind (1980) going gold, and 1981’s Controversy doing well. Then came 1999 (1982) which was so ground-breaking that it was inducted into the Grammy Hall of Fame in 2008 and, with singles “Little Red Corvette” and the title track “1999,” is considered one of the artist’s most influential albums.

But none of those records can compare to 1984’s Purple Rain which is so spectacular that the track list reads like a greatest hits album: “Let’s Go Crazy,” “Darling Nikki,” “When Doves Cry,” “I Would Die 4 U,” “Baby I’m a Star,” and “Purple Rain,” just to name a few. Although Purple Rain is technically a soundtrack, it is without a doubt Prince’s most significant record as it earned him several awards and introduced his band, The Revolution, to the music-loving world through the movie.

Because Prince released so many albums throughout his career, it would take too many words to talk about each one.  In fact, in 1993 when he changed his name to an unpronounceable symbol as a big middle finger to his label Warner Bros., he released five records between 1994 and 1996. By turning out all of those albums, Prince was able to release himself from contractual obligations to Warner Bros. Additionally, the phrase “The Artist Formerly Known As Prince,” became forever ingrained in the pop culture lexicon.

Following his departure from Warner Bros., Prince signed with Arista Records in 1998 and in 2000 began referring to himself as “Prince” again. Then in 2004, through a one-album agreement with Columbia Records, he embarked on his Musicology Tour in support of the record of the same name. That stadium tour marked the first time I saw Prince live. I remember walking into the venue and receiving a copy of Musicology because it came with the purchase of our tickets. We couldn’t believe we were getting a free CD – it had never happened before! Musicology went on to earn two Grammys: Best Male R&B Vocal Performance for “Call My Name” and Best Traditional R&B Vocal Performance for the title track. Musicology was also nominated for Best R&B Song and Best R&B Album, while “Cinnamon Girl” was nominated for Best Male Pop Vocal Performance.

The second and final time I got to see Prince was in 2013 – just four months after he released a new song called “Screwdriver.” When I heard that song for the first time I was floored – only Prince could get away with a lyric that said: “I’m your driver, you’re my screw!” In April 2013 he announced a West Coast tour called the Live Out Loud Tour with 3rdeyegirl (aka the hardest-rocking female trio I’ve ever seen) as his backing band. For that tour he was only playing small venues, tickets were $250 a piece, there was no merchandise sold, and no photos allowed. To this day it is still was one of the best shows I’ve ever seen.

Prince’s final album HITnRUN Phase One was first made available on September 7, 2015 (my birthday) on music streaming service Tidal before being released on CD and download on September 14.

Some of my favorite Prince lyrics:

I guess I should of known

By the way you parked your car sideways

You don’t have to be cool

To rule my world

I just want your extra time and your… –Kiss

Pretzelbodylogic is so much fun

Dreamin’ of each other

On each other’s tongue

Now we both to sleepy to get the gun –PretzelBodyLogic

The entire brilliant intro for “Let’s Go Crazy” that starts out:

We are gathered here today

To get through this thing called life…

The intro guitar for “When Doves Cry” that leads to:

Dig if you will the picture

Of you and I engaged in a kiss

The sweat of your body covers me

Can you my darling

Can you picture this?

Rest in peace Prince and know that you gave us some of the most electrifying and exhilarating music of all time.