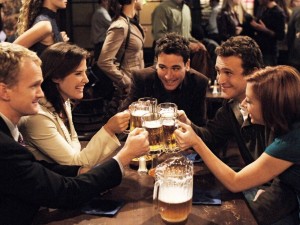 Before I begin I would like to thank Netflix for having all nine seasons of How I Met Your Mother (HIMYM) available for viewing.

For years I heard about how I have to watch HIMYM and how it’s the funniest show on television. So when we finally got our new Smart TV, (apparently “dumb” TVs no longer exist) and it came with Netflix, I thought it would be a great time to start from the beginning. Because the series started in 2005 and ran through 2014, I couldn’t believe that I was getting away with watching it so late without any spoilers so I will not be spoiling anything either.

HIMYM stands out from other popular half hour shows from the last two decades because it seamlessly goes back and forth between both comedy and drama and covers a wide scope of relatable topics including family issues, friendships, marriage, kids, difficult childhoods, evolving relationships, stages of life and more. A lot of shows don’t even attempt to cover more than a few years at a time but HIMYM goes beyond that by flashing back and forward in every season and in most episodes. Additionally, the wit, detail and intelligence that went into each episode shows a range that most shows never accomplish. The writers created characters that were idiosyncratic without being ridiculous, smart without being pretentious and compassionate without being sappy. I believed that these people were real and they were so fun I wanted to join them at their favorite bar for a drink.

For those who are fans of Friends, there are definitely a few undeniable similarities I noticed pretty early on. Similar to Friends (which ran from 1994 through 2004), HIMYM is about the daily lives of twenty-somethings living in New York City. Unlike Friends, this show is framed by a voiceover from the main character Ted who is telling his children (in the year 2030) the story of how he met their mother. While there are several parallels between the two shows (they frequent their local hangout spot during normal work hours, the catchphrases, no one seems to know what one member of the group does for a living, one character becomes a professor, etc.) there is no question that HIMYM is better. The writing is superior, the acting is better, the scenarios are more realistic, the flashback and flash-forward structure is unique and thankfully there is no one as stupid as Joey on the show.

Don’t get me wrong, I liked Friends and have seen most of the episodes but sometimes the show would rely too much on the gimmick and not advance the storyline. HIMYM definitely had some gimmicky moments (i.e. the slap bet) but every single episode advanced the plot. The only season that spent too much time on one particular storyline was season nine. That season could have been about five episodes shorter and would have been just fine. Overall, HIMYM usually chose to go the clever and creative route which I appreciated. That being said, Friends was nominated for 62 Emmy Awards, winning six, while HIMYM scored 28 Emmy Awards, winning nine. Either way I can now agree with virtually everyone in the world who told that HIMYM is one of the best shows to grace television. Before watching the series it had been awhile since a network broadcast television show made me laugh out loud consistently throughout all the seasons.

Ten of my favorite things about HIMYM:

-The show is not afraid to push boundaries with pop culture references like Top Gun and Star Wars and euphemisms like sandwiches as bongs and singing a song about banging.

-The characters represent real people with real issues. Nothing is tightly packaged or without flaws – just like the rest of us.

-Neil Patrick Harris does an incredible job of convincing everyone that he is a heterosexual womanizer. “Legendary” and “Challenge Accepted” have become part of our inside joke repertoire.

-All five main characters turn in superb acting performances. Throughout all nine seasons, Barney, Marshall, Lily, Robin and Ted had to break into song, pull off a variety of different ages (which meant varying ages and styles), make the audience feel like they were part of the inside jokes and constantly make fun of Canada. (I assume that either the writers hate Canada or are from Canada because they would not leave that place alone!)

-Each of them has their own little identifiers: Barney likes catchphrases, one-night stands, suits and laser tag. Originally from the Midwest, Marshall is a family man and lawyer who will do anything to help the environment. Lily is a quirky artist/kindergarten teacher who is the moral center of the group and can’t wait to become a mom. She and Marshall get engaged in the pilot episode. A former Canadian pop star, Robin is a career-driven television news reporter who has five dogs but never wants to have kids. Narrator Ted is an architect who spends the entirety of show looking for his soulmate which we learn about through the stories he tells his kids in the future.

-The flashbacks of Marshall, Lily and Ted in college are incredible because the actors do a great job portraying younger versions of themselves. Goth Lily, Afro Ted and Stoner Marshall are hilarious and a true portrayal of the major differences between people in their 20s versus their 30s.

-The episode that explains the origin of “Suit Up” and shows Barney as a tie-dye wearing, Peace Corps bound, long-haired hippie is priceless.

-The episode that features the “Underneath the Tunes” show (making fun of Behind the Music) when Robin Sparkles goes from a glittery pop singer to angry Alanis Morissette-type, grrrl rock singer Robin Daggers is perfection. It even features interview clips from actual Canadian celebrities like Jason Priestley, Paul Shaffer, Geddy Lee and K.D. Lang. It also includes Dave Coulier (who everyone thought “You Oughta Know” was about in real life) as the person everyone thought Robin Daggers wrote her grunge song about. I couldn’t stop laughing.

-Finally, HIMYM is about choosing and creating your own family whether that meant significant others or friendships. Through their ups and downs, adventures and antics, the five main characters ultimately show that love and friendship are most important and do, in fact, conquer all.