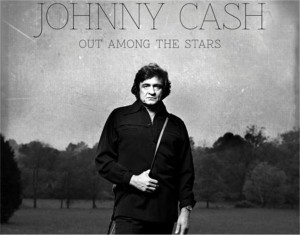 Although the music business is no stranger to posthumous album releases – i.e. Tupac, Biggie, Jimi Hendrix – for some reason I feel this one is a bigger deal because it’s coming out almost 11 years after Cash’s death in September 2003.

On March 24, 2014, the Cash family will release Out Among the Stars which is comprised of 12 new songs and was recorded with Billy Sherrill in the early 1980s, but never released. Why? Because Cash recorded the tracks for Columbia Records in 1981 and 1984 but was dropped from the label in 1986.

The legendary country music singer-songwriter recorded these songs 30 years ago and they were recently found by his son who was cataloging songs from the Cash archive. Well thank you Cash Jr. for being organized and finding what I think will be some serious musical gems.

Not only are we getting new music from the Man in Black, apparently there are also two duets with wife June on the album. If their chemistry on those duets are anything like they were on “Jackson” and the rest of their hits then we’re in for a treat. Cash also collaborated with fellow country legend Waylon Jennings in the album.

In a very short preview, Cash’s son is quoted saying that after the death of his parents it was necessary to go through the archives. Then we are given a quick taste of one of the new songs, “She Used To Love Me A Lot,” and it literally gave me chills. Welcome back Mr. Cash – we’ve missed you.