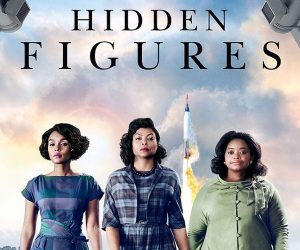 Similar to the books I choose to read, the movies I choose to watch, especially those I see in the theater, usually depict real people and discuss real stories. Hidden Figures fits that description as it is based on true events that occurred in the 1960s and centers around three female African-American mathematicians at NASA. Starring Taraji P. Henson as Katherine G. Johnson, a mathematician who calculated flight routes that were integral in propelling astronaut John Glenn into space, Octavia Spencer as Dorothy Vaughan whose mechanical prowess and leadership skills boosted her to the head of her department, and Janelle Monáe as Mary Jackson, who stomped on every boundary in her way to become an engineer, Hidden Figures is captivating, funny, and a bit of a tearjerker. Supporting roles from Kevin Costner, Kirsten Dunst, Jim Parsons, and Glen Powell round out the cast nicely.

Throughout the film, there are many instances that depict the semi-racist people working at NASA (i.e. head engineers and supervisors) being forced to give these women a chance because they were the best at what they did. Their thoughts on whether black women should have the same professional opportunities became irrelevant because Katherine, Mary, and Dorothy’s minds were more disciplined, creative, thoughtful, and intelligent than those of their higher-ups. While members of the NASA personnel tried over and over again to use the “we’ve always done it this way” excuse and pout about how there isn’t protocol for women (never mind black women) participating in important meetings or using the same bathrooms and coffee mugs, they didn’t have a choice but to let these three extraordinary women take the lead.

With all of their talent and historical significance, it’s amazing that, prior to seeing the film, most people had never heard of Katherine, Dorothy, and Mary– myself included. But then again that’s kind of the point – their personas were as hidden as the math equations they worked on. Still it’s a bit unnerving that, in 2017, engineers and mathematicians who literally propelled men into space – historic women – were still unknown by so many. Not anymore.

A few of my favorite scenes:

Clearly both critics and fans are taking notice of this film. Released on December 25, 2016, Hidden Figures has already been chosen by the National Board of Review as one of the top ten films of 2016 and has been nominated for numerous awards: three Oscars (Best Picture, Best Adapted Screenplay, and Best Supporting Actress for Ms. Spencer) and two Golden Globes (Best Supporting Actress for Spencer and Best Original Score). I’m thrilled that this movie was made and that it is garnering the attention it deserves. If you’re interested in a true story about remarkable women who used their intelligence, grace, and wit to get ahead and do great things, go see this movie. You will find yourself being proud of all three of them.