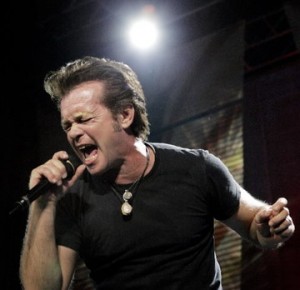 Last night 59-year-old Rock and Roll Hall of Fame inductee John Mellencamp put on one of the best shows I’ve ever seen when he played for two straight hours at the Buell Theatre in downtown Denver.  As humble as he is talented, he introduced himself to the audience as if we didn’t know who was standing there before us and sitting next to my mother, who has seen virtually everyone except John Mellencamp, I was thrilled to be witnessing a rock and roll legend.

Since buying the tickets in October 2010, I had read a few interviews Mellencamp gave where he said that if people were looking for a greatest hits show they should stay home.  Although I was happy just to have the opportunity see one of the true pioneers of rock and roll – someone who is up there with Johnny Cash, Bob Dylan and Bruce Springsteen – I was a little disappointed at the idea that I wouldn’t get to hear at least a few of the classics.  Wow was I wrong.

Before Mellencamp came on stage there was an hour-long documentary on the making of his latest album No Better Than This.   We caught the last 15 minutes of it and when it was over I realized how much influence Johnny Cash has had on our beloved Johnny Cougar.  After a short intermission the theatre’s lights went down and, like clockwork, the auditorium boomed with one of my favorite Cash songs of all time – “God’s Gonna Cut You Down.”  It gave me goose bumps.

After Cash set the tone the announcer came on and said: “Ladies and gents, from Bloomington, Indiana, John Mellencamp.”  The crowd went insane and it was on.  While Mellencamp is short – he may or may not be able to clear the height requirement to ride roller coasters – his voice, personality and charisma are massive.  He is a storyteller and songwriter who has been a real American rebel his whole life and as a result his songs bleed truth.  He is also a performer and a real showman as he never stopped moving for the 120 minutes he played – dancing, talking and smiling.  He was in constant motion.  He is also one of the most gracious artists I’ve ever seen as he thanked the audience at least a dozen times – everyone was so excited to be there and he was too.  You could see it in his face.

Although the music never stopped the show was sort of broken up in three parts – the first and third Mellencamp was backed by his extraordinarily talented band that consisted of his lead guitarist who has been touring with him for 40 years, another guitarist dressed in a full suit, a bass player who played traditional and upright bass, a drummer, piano player, accordion player and the most talented of all, the fiddle player.  This ensemble was so good it reminded me of Springsteen’s legendary E-Street Band.  Every single musician on that stage was getting done – going above and beyond to make the show the best it could be.  It was overwhelming.

The middle part of the show featured Mellencamp by himself on acoustic guitar talking to the audience and telling stories.  He intertwined these stories with songs in a vignette-like format which made me feel like he was talking just to me.  He talked about his grandmother, the devil, the women that have come and gone in his life, being a sinner and how “there is nothing worse than a dangerous old man.” During his acoustic set he stripped down classic favorite “Small Town” and then told the audience that while walking around downtown a man named Jerry came up to him and asked him to play “Jackie Brown.”  Mellencamp explained that he hadn’t planned on playing the song but he did it for Jerry.

Mellencamp and his band ended the show with more favorites like “Jack and Diane,” “Pink Houses” and “R.O.C.K. in the U.S.A.” but he put a new spin on every single song.  And it was a good spin.  A great spin.  The songs were so different that you almost didn’t recognize them from the first few notes but it worked.  I was actually surprised when he played “Pink Houses” because in the beginning of the show some asshole in the front row screamed, “John! ‘Play Pink Houses’” and, being the cool guy that he is, Mellencamp said to him in a very jovial manner: “I told you guys this wasn’t going to be a greatest hits show.  Do you know how old I was when I wrote that song? I was like 27 years old.  I’m 59 fucking years old now – give me a break!”

While Mellencamp is clearly one-of-a-kind, the Johnny Cash influences were not only in his documentary but also in his style of playing.  Like Cash, Mellencamp holds his guitar like a rifle and blatantly talks to the audience in a deep, raspy voice that is as alluring as it is badass.  He tells the audience he doesn’t care about the past, “life is short even on its longest days” and “save some time to dream.”  There is something to be said about seeing a legend live – they have a different swagger, a different voice and they have real stories.  Mellencamp has written and does write every single one of his songs.  People just don’t do that anymore and it shows.  If John Mellencamp’s music tells the stories of a sinner then I’ll go outlaw with him any day.