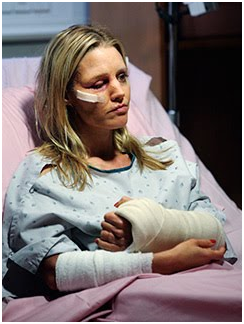 Whether or not you’re a fan of Private Practice (the Grey’s Anatomy spinoff starring Kate Walsh as Addison Montgomery) you need to watch the episode where Charlotte (KaDee Strickland) gets raped. It is horrifying, heart wrenching and so real that you won’t be able to look away. It was also one of the bravest performances I’ve ever seen by a television actor.

But let me back up a minute. This show is based around Oceanside Wellness Group, a co-op private practice in Los Angeles where several types of medical practitioners reside under one roof. The doctors’ fields include Neonatal Surgery, Obstetrics, Alternative Medicine, Infectious Diseases, Critical Care, Reproductive Infertility, Pediatrics, Urology, Sexology, Psychiatry, Neurosurgery, Internal Medicine and Cardiothoracic Surgery, among others.

In the episode centered around Charlotte’s rape we find out that this no-bullshit southern broad can’t take pain killers for her severe wounds because of a pill problem she used to have. We know this only because she explicitly insists that she can’t take pain killers and as a result, we watch the excruciating pain she goes through as another doctor stitches her wounds without the help of anesthesia.

To say that KaDee Strickland’s performance in the rape episode was Emmy-worthy is a severe understatement. The anger, fear, embarrassment and agony in her eyes was palpable. It gave me the chills to watch a character who is usually tough as nails be subjected to the kind of horrific aftermath that rape leaves. In the subsequent episode we see Charlotte’s fellow doctors trying to help but it only makes it worse. Addison is the only one who knows she was raped – everyone else (including Charlotte’s fiancée) thinks she was mugged. Charlotte wants everyone to treat her normally but there is nothing normal about the damage that was inflicted on this woman. The “aftermath” episode concludes with Charlotte scurrying over to fellow doctor Amelia’s office (also a former addict) to ask her to go to a meeting. If that’s not strength and bravery I don’t know what is.