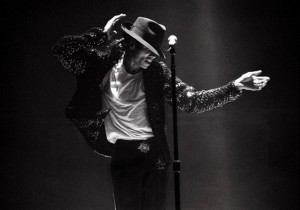 Four years ago we lost one of the most iconic people in music history and if he was still with us today he would be celebrating his 55th birthday. Time flies but I still remember the day pop music died like it was yesterday. A hot day in Denver and all of the sudden I hear that Michael Jackson passed away (on my father’s birthday, June 25) and it was like the world stopped.

MTV showed non-stop MJ videos for days, people were crying in the streets clutching old photos, records and CDs and, once again, the notorious star was back in the news. I wasn’t alive when JFK was shot or when John Lennon was shot but from what I’ve heard the reaction was similar – people were frantic, scared and sad.

Although everyone on the planet knows that Jackson had more than a few screws loose (sad but true), people also recognize what an extraordinary entertainer he was and the impact he has had on current artists – i.e. Justin Timberlake, Usher, Chris Brown, etc. etc. etc. His influence runs deep and I believe it always will.

– Jackson is recognized as the most successful entertainer of all time by the Guinness Book of World Records and is the most-awarded recording artist in the history of popular music.
-The music videos for his songs were credited with breaking down racial barriers and transforming the medium into an art form and promotional tool. The popularity of these videos helped to bring the then relatively new television channel MTV to fame.
-Through stage and video performances, Jackson popularized a number of complicated dance techniques such as the robot and the moonwalk.
– 1982’s Thriller is the best-selling album of all time.
-His other records, including Off the Wall (1979), Bad (1987), Dangerous (1991) and HIStory (1995) also rank among the world’s best-selling.
-Jackson is one of the few artists to have been inducted into the Rock & Roll Hall of Fame twice.
-Some of his other achievements include: 13 Grammy Awards (including the Grammy Legend Award and the Grammy Lifetime Achievement Award), 26 American Music Awards (more than any other artist), 13 number-one singles in the US in his solo career, more than any other male artist in the Hot 100 era, and the estimated sale of over 400 million records worldwide.
-On what would have been Jackson’s 52nd birthday (August 29, 2010) he became the most downloaded artist of all time.

Are you kidding me?! All that for one person?

People always say there will never be another Michael Jackson and I think that might be right. How in the world could anyone ever top those kinds of achievements? I hate to say that it will never happen but I just don’t see how it’s possible to be so innovative for so long.

It make me wonder what music would be like if Jimi Hendrix, Kurt Cobain, Janis Joplin, Jim Morrison, John Lennon, Buddy Holly, Ronnie Van Zant, Steve and Cassie Gaines, Otis Redding, Brian Jones, Bradley Nowell, Hank Williams, Sid Vicious, Duan Allman, Biggie and Tupac – all dead before age 30 – had made it to age 50 like MJ did.

Rest in peace Mr. Jackson and don’t worry – the world will never forget you.