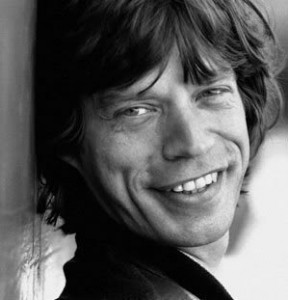 Can you believe that Mick Jagger is 70 years old?! Yeah probably but I bet your parents are feeling a little nostalgic today. Without a doubt one of the most famous names in rock & roll, Jagger’s career has spanned over 50 years. His distinctive voice and performance, along with Keith Richards’ guitar style, has been the trademark of The Rolling Stones throughout the career of the band.

In honor of Sir Jagger’s big 7-0 here are 10 trivia facts about one of the most influential figures in rock & roll history:

1) Has appeared on the cover of Rolling Stone magazine 20 times.

2) Inducted into the Songwriters Hall of Fame with Keith Richards in 1993.

5) The North American leg of The Rolling Stones’ 1994 Voodoo Lounge Tour was the most financially successful tour ever.

6) Sang back-up vocals on the Carly Simon hit “You’re So Vain.” Jagger is more noticeable toward the end of the song when his accent comes through.

7) The Rolling Stones were voted the fourth Greatest Rock & Roll Artists of all time by Rolling Stone magazine.