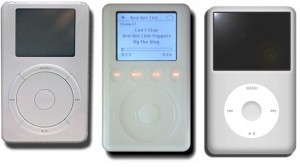 I don’t have to tell you how impressive the iPod is and how Steve Jobs changed the world and how the iPod paved the way for iTunes, the iPhone and the iPad.  Here are the by-the-numbers facts that show how the iPod is even more remarkable than you thought:

– November 2001: The iPod debuted and a few hundred thousand units were sold in that first year.

-July 2002: Apple released a Windows-compatible model allowing anyone with any kind of computer to be able to use the device.

-April 2003: Jobs announced the launch of the iTunes Music Store which featured 200,000 songs at 99 cents each.  By the end of that first week one million songs were sold.

-June 2003: Apple announced that it sold its millionth iPod.

-April 2008: iTunes became the number one music retailer in the United States.

-April 2010: The iPad is unveiled and 15 million were sold by December of that year.  Apple now owns 80 percent of the tablet market.

-October 2011: iPhone became the best-selling smartphone of all time and the iPhone 4S debuted and sold four million units.

Can you believe the iPod has already been around for 10 years?  Time flies when you’re changing the world.