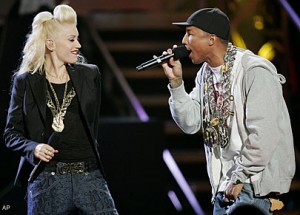 Three days ago (sorry I was catching up on my DVR) Carson Daly announced that Gwen Stefani and Pharrell Williams will be filling the two revolving coach’s chairs for season seven of The Voice and I couldn’t be more excited! Although I have always liked Cee Lo Green, I’m glad that I won’t have to listen to Christina Aguilera next season. As expected, Adam Levine and Blake Shelton will stay in their chairs and it will be great to see how their undeniable chemistry meshes with Stefani and Williams.

While Stefani will be stepping in for Aguilera because she is pregnant and chose to opt out (lucky us), Pharrell will be replacing Cee Lo indefinitely. His public statement said that he did not want to wear out his welcome but unfortunately I think this move is due to his recent legal troubles but that’s a whole other story.

A fan of No Doubt and Stefani since I was in middle school, I can’t wait to see who she chooses and how she coaches her team. I think she will bring so much to the show and I like that she, like Shakira who has done a great job during her two seasons, is a rock chick at heart. Stefani also knows how to handle both group and solo work.

Williams, fresh off his recent double Grammy win for “Get Lucky,” is known for his work as one half of record production duo The Neptunes and as lead vocalist and drummer of rock, funk and hip-hop band N.E.R.D. Not only does Williams know how to perform, he has also produced Grammy-winning albums and songs for heavy-hitters like Justin Timberlake, Jay-Z, Snoop Dogg, Mariah Carey and Gwen Stefani, among many others.

Even though season six is still going strong and continues to be very exciting, it’s amazing that The Voice is able to generate this much conversation and enthusiasm about a season that doesn’t start until the fall. As far as I’m concerned the show is keeping and will continue to keep its spot as the top singing show on television and I can’t wait to see what they do next.