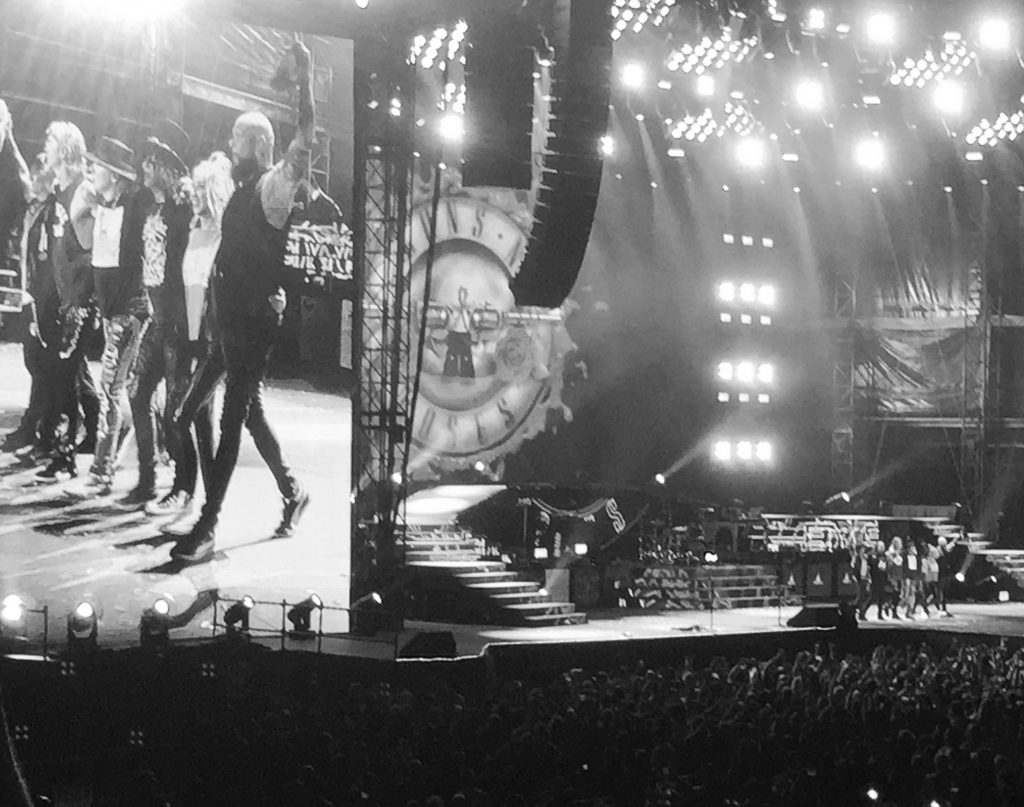 Three hours. 30 songs. What year is it? It’s 2017 and Guns N’ Roses, the band that before last year hadn’t played together since 1993’s Use Your Illusion tour, has been slaying arenas all over the world. Beginning in April 2016 and ending in November 2017, the tour is eight legs with 78 shows in North America, 16 in South America, eight in Oceania, nine in Asia, and 19 in Europe. That’s a total of 130 shows worldwide! Raking in $340 million, Not in This Lifetime was the highest earning per-city global concert tour of 2016 and, as of today, is ranked as the tenth highest-grossing concert tour of all time. Wow.

So how is this possible? Axl Rose is 55 years old, Slash is 52, and Duff McKagan is 53. It doesn’t matter. Last night proved that if you want to put on a spectacular arena rock show you can. And they did. Axl was literally sprinting back and forth across the stage while Duff and Slash shredded their guitars with a ferocity that kept a smile on my face all night. Dizzy Reed is still a piano wizard and even the new band members, Richard Fortus (rhythm guitar, backing vocals), Frank Ferrer (drums, percussion) and Melissa Reese (keyboards, synthesizers, percussion, backing vocals), absolutely killed it.

Clad in black leather, studded boots, huge cross necklaces, his signature bandana, giant skull rings, and several different jackets (he made a few costume changes throughout the night) that featured fringe and studs, Axl Rose is the epitome of a rock and roll star. He didn’t do a whole lot of talking to the audience but he didn’t have to because they started on time and hit every note of every song they played. Pulling tracks from Appetite For Destruction, Use Your Illusion I and II, and Lies, the band sounded and looked like they were happy to be playing in front of 50,000 fans. Even their covers of Bob Dylan, The Who, and Soundgarden were incredible.

While Duff is definitely in the best physical shape of the three (he sang their cover of the Misfits song “Attitude”), Slash reminded every single fan in attendance why he is one of the best guitarists in the history of rock. Over the course of three hours, he played five different guitars (including a double neck) and, in his signature top hat, leather pants, and aviator sunglasses, was jumping off the stage while commanding it. Although Axl is without a doubt one of the best frontmen I’ve ever seen live, Slash stole the show. Watching the big screen close-ups of him moving his fingers up and down the necks of his guitars was mind-blowing. I don’t know how a person does that.

When I bought these tickets eight months ago (yes, December 2016), I knew that it was going to be a special show. I’d seen Axl and Dizzy play together with a few hired guns before, and I had seen Slash and Duff play with Velvet Revolver, but never had I seen Axl, Slash, and Duff together. To say I was excited was an understatement and this show lived up to every single hope, dream, and expectation I had for an incredible performance.

Welcome to the Jungle

You Could Be Mine

Used to Love Her

The Seeker (The Who cover)

If you’re a fan and haven’t seen them on this tour, please please please go buy a ticket. It is worth every dollar you spend to see the three biggest guns in rock and roll playing songs that future generations will be listening to for decades to come. I attended last night’s show with the biggest Guns N’ Roses fan I know – my significant other – who saw them on their Appetite and Use Your Illusion tours. 30 years later, he was still blown away. And so was everyone else there.