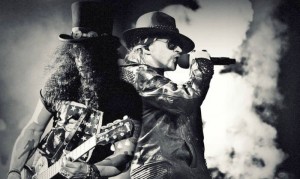 It’s always nice when notorious rock and roll bands have a sense of humor – especially when the members have been at war for over two decades. On November 12, 2015, I wrote about how we were all going to have to skate home because hell was freezing over: the original Guns N’ Roses members were getting back together and announcing a tour. And last night it actually happened.

For the first time since July 1993 in Buenos Aires, Axl Rose, Slash, and Duff McKagan shared a stage. The inaugural event took place at the Troubadour in Los Angeles and kicked off the band’s….wait for it….aptly titled “Not In This Lifetime Tour” – a clear middle finger to everyone who (understandably) never thought Slash and Axl would get a grip and perform together again. While the tour doesn’t technically begin until June 23 in Detroit, Guns is slated to play in Las Vegas and Mexico City and will headline Coachella.

Here are the rest of the dates:

Notice that they aren’t coming to Colorado….anyone up for a road trip?