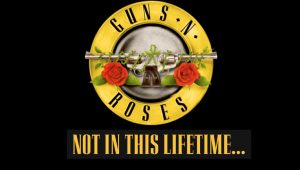 Although the phrase “Getting the band back together” has become known for getting talented groups of people back in the same vicinity in the hopes that the same chemistry will arise, it started with getting actual rock bands back together for more music magic. Throughout rock history, many bands have endured their share of comebacks including Ozzy Osbourne, Metallica, Van Halen, Kiss, and Aerosmith, among others, and most times it’s been successful. In fact, if it wasn’t for their “comebacks,” I would have missed the last three bands mentioned and that would have been a shame because those shows were incredible.

One band that came out…um…guns blazing…was Guns N’ Roses and, while they quickly made their mark on rock and roll for their sound, they also earned a reputation for sometimes being more trouble than they were worth. Especially frontman Axl Rose and his legendary tantrums and lateness.

But something happened within Axl over the last few years – he got his act together (literally and figuratively) and decided that it was time to bring his original band back together. In April 2016, Guns N’ Roses announced their “Not in This Lifetime” tour which stretched from June through August of this year and marked the first time since July 1993 that Axl Rose, Slash, and Duff McKagan shared a stage. Garnering consistent positive reviews, the tour earned over $112 million from gross ticket sales. See Axl – things go well when you actually show up and sing!

Although it was exciting to hear that Guns N’ Roses united their classic lineup (minus Izzy Stradlin and Steven Adler), I was bummed that the tour wasn’t coming to Colorado but hoped that maybe (just maybe) they would extend and come west. Well guess what? The band is coming to Colorado next August and I can’t wait to be there! Tickets go on sale this Saturday so wish me luck.

While I’ve seen members of Guns N’ Roses perform, it’s never been the original lineup together. In April 2005, I saw Slash in black leather pants and Chuck Taylors as lead guitarist for the Scott Weiland-fronted Velvet Revolver, along with McKagan and Matt Sorum. Then in December 2011, I saw Axl Rose and Izzy Stradlin and a few other Motley Crue-looking hired guns which was so much fun.

If things continue to go well, next August should be a monumental show – not only because of the talent slated to take the stage but because of the rock and roll historical value that comes with their presence. Thank you Guns N’ Roses for getting a grip and holding on to that grip – looking forward to an unforgettable experience.