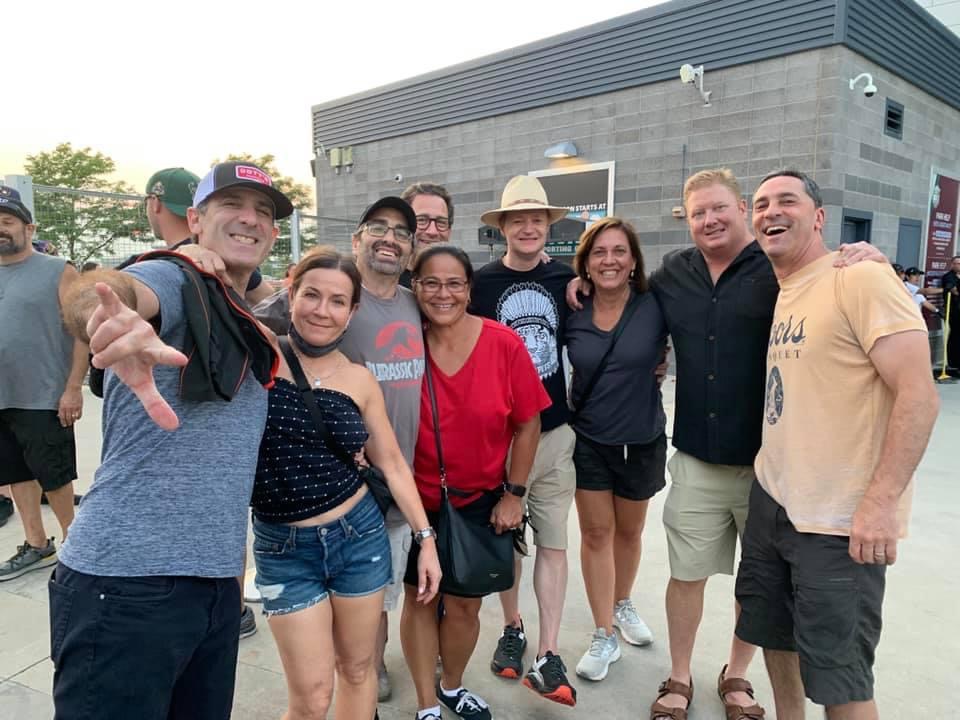 Editor’s Note: For the first time in the history of Lieff Ink, I am publishing someone else’s writing! My friend and fellow author, Danny Foster, attended the Guns N’ Roses show last night in Denver and wrote a review about the band we have talked about together for many years. Here is his account of the night, along with his analysis of why people still love G N’ R. Love them or hate them, over three decades later, the band continues to hold the title for releasing the best-selling debut album of all time.

Nostalgia is a funny, old friend. You can’t wait to see them and catch up and re-live some wonderful times in your life. Before kids and spouses and jobs and taxes. Just kick back like it is 1988 all over again. However, nostalgia can be tricky too. After a little while of catching up you realize those days are long gone. While they were special and exciting and fun, they end and new important, wonderful things emerge to fill their place. Nostalgia can be intoxicating, but it can leave you with a hangover that can be quite painful after the euphoria fades.

Hence, I give you my nostalgic experience last night, August 16, 2021, at the Guns N’ Roses show at Dick’s Sporting Goods Park in Commerce City. To begin, I am not a music writer or even a true music aficionado. I like what I like and I am no journalist. I didn’t take any notes so I cannot even recall every song they played last night. But I can say it was joyful and fun and loud and a little sad. I was joined by about 8,000 other middle-aged, elated rockers who had kids in college, elderly parents, or colonoscopies scheduled sometime in the next few months. Some of the women squeezed into their old black, G N’ R gear from days gone by, while many of the men wore the ubiquitous red bandana around their balding heads a la Axl Rose. What a delightful scene for a child of the 80s. I assume the crowd would have been larger if it hadn’t been for the Delta variant surging and the concert being rescheduled from last year’s cancellation due to Covid. It was on a Monday night in mid-August, and heck, many of us, most of us, have day jobs.

Axl, Slash, Duff, and the rest of the gang put on a two and a half hour show jammed with every Guns song you could want (except they obviously avoided “One in a Million” and “Used to Love Her”). Axl hit the ground running with “It’s So Easy,” which I assume was meant to be a tad facetious. Nothing looked easy about Axl’s singing. Yes, he struggled to hit the old notes and his iconic voice strained credulity, but damn it if he didn’t try! His bandmates can still rip their weapons, but Axl is a singer, and old age, weight, and altitude can play mean, vicious games with that instrument. Slash on the other hand made everything look easy. Dude can shred, and shred he did. Especially with a long solo three quarters of the way through the show when everyone knew, JUST KNEW, that it would lead into the most recognizable guitar riff in the past 35 years…“Sweet Child O’ Mine.” Goosebumps when those notes started. Axl did that well. And Duff McKagan was keeping the beat perfectly all night. And damn that dude is ripped. He looks more like a triathlete than a 57-year-old rock star. Dizzy Reed played keyboards but to be honest I have no idea if he was good or bad, again I am not a music writer. But he was alive and that’s a good thing. I don’t think Izzy Stradlin was there. There were some additional performers, but none of them were original G N’ R so I didn’t really care (sorry other people).

But let’s be real, we all just wanted to see if Axl and Slash still had it. And I for one will say they did. It was a lovely jaunt down memory lane with a crushing rendition of “Night Train.” An unexpected, long play of “Rocket Queen,” as well as Axl playing piano on “November Rain.” Those all sounded better than “Welcome to the Jungle” which, let’s face it, is not a song for an old vocalist. Sha na na na na na knees. More like knee replacement. And Botox. Lots of botox. “Civil War” sounded amazing but my guess is that everyone in the crowd couldn’t shake the images of Afghanistan that morning and the violent rush to leave the Kabul airport. Seems like some songs are always prescient. The night ended with “Paradise City.” Of course it did. It had to. And you know what? It sounded great.

I felt nostalgic for much of the night, and for a while I fondly remembered my youth and fun days gone by. But then I got to look at my beautiful wife of 21 years next to me, and I received late night texts from my kids wanting something (probably some money), and I thought about some successes I recently had at work. And you know what? I wasn’t filled with pangs of sadness…I was filled with joy. It’s been a wonderful ride. Thanks G N’ R for a reminding me of old, special times and providing us all a wonderful night.