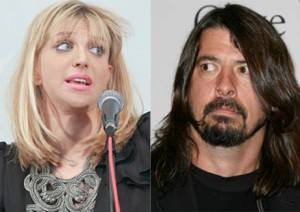 Here’s what sucks about Courtney Love’s most recent nutjob antics: Hole is a great band and Courtney Love is a great guitarist. But no one thinks about that and no one cares about that when Love is constantly screaming and stomping around like a little kid. She bitches about everything – Kurt Cobain, Dave Grohl, the Nirvana legacy, blah blah blah. Shut up and play your guitar – when you want to you be you are a great musician.

The latest of Love’s bullshit started with a video from last week during which she ranted about how her family is in disarray while Grohl steals food off their table. A few quotes from her tirade:

“I wasn’t in Nirvana. However, I do own Nirvana … with my daughter, and because of tax laws I have to give money to his sister, Kim Cobain and [Kurt’s mother] Wendy Cobain,” Love said.

She continued, “What I was saying is [that] Dave makes $5 million a [Foo Fighters] show, he doesn’t need the money [from Nirvana] … [so] why the f— then does he have a Nirvana Inc. credit card and I don’t? And last week he bought and Aston Martin on it.”

Then last night Love went off on another rant during her performance with Hole at a festival in Brazil. In addition to claiming that she has license to use the word “fags” thanks to her supposed status as a “gay icon,” requesting chapstick for a herpes sore and insisting that she was the inspiration for the Smashing Pumpkins’ hit albums Siamese Dream and Mellon Collie and the Infinite Sadness, the singer launched into another diatribe after spotting a fan carrying a photo of Cobain.

“I don’t need to see a picture of Kurt, asshole and I’m going to have you fucking removed if you keep throwing that up,” she screamed. “I’m not Kurt – I have to live with his shit, his ghost, his kid every day. Throwing that up is stupid and rude and I’ll beat the fuck out of you if you do it again.”

Not sure what her issue is with seeing photos of her late husband or with Grohl but it seems that she has always had one with the latter. Is it because he’s one of the best front men in rock and roll and she can’t manage to get through a show without screaming like a crazy person? Is it because every album his band turns out is successful and she hasn’t had a hit since 1998’s Celebrity Skin?

I think Courtney Love is extremely talented and I love Hole but come on. Dave Grohl and the Foo Fighters are so admired and well-respected it’s not event funny. I wonder what Love’s daughter thinks of her mother’s behavior. Frances Bean Cobain is 19-years-old (time flies) and we don’t see her whoring around in the tabloids. Nope. Her 47-year-old mother is taking on that role to a ridiculous degree and no one thinks it’s funny or cool. Whether Love likes it or not she will always be connected to Cobain (and Grohl for that matter) so she needs to stop acting a damn fool. Get a grip Courtney – you’re almost Axl’s age.